Homo sapiens, it would seem, is man's deadliest enemy. No vertebrate, not even the most ferocious of the carnivores, habitually kills members of its own specieswith two exceptions... rats and men. Can it be that man is no better than the rat? That, as Konrad Lorenz and a number of his followers maintain, man is by instinct an aggressive creature, a born killer, and that it is this innate propensity to violence that accounts for individual and group aggression in man ?

Last May, Unesco brought together at its headquarters in Paris a group of distinguished biologists, zoologists and other scientists from more than a dozen countries to face this question. Their answer: a unanimous and resounding "No!" Man is no killer by nature. Man does not possess an "aggressive instinct." What went on during this debate and some of the startling conclusions of recent scientific research in the field are the subject of the first part of this issue.

But there is another domain where the depredations ofman have reached the hot danger point: the aggression of technological, industrial and urban man against his natural environment, against that thin layer of our planet that has come to be known as the Biosphere. But here too man has the answer within himself. For if we so will it, by our single and joint acts, there is still time to save our planet and life upon it from irreparable ruin. 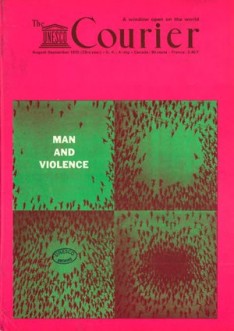