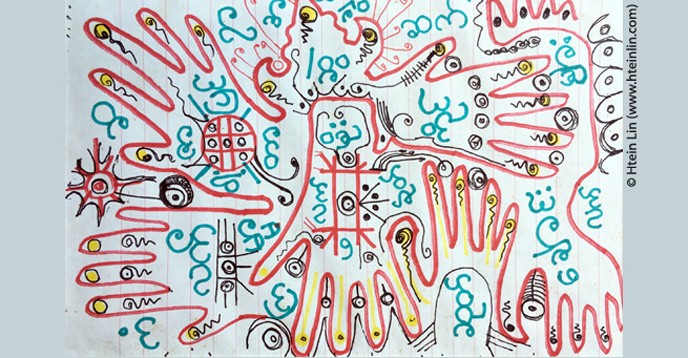 As first expressed, in 1789, the rights of man  were  mainly an  assertion  of the  desire  for  individual  independence. “All  for   the  individual  within   Society,”  implying  that  the 'human species' was  created  in order to expand and culminate  in  a  multiplicity  of  units  which would each,  in isolation, reach  their maximum development. This  would  have  been the principal concern and ideal of  the eighteenth-century humanitarians.

Since then, owing to the importance assumed in  the world by collective phenomena, the  fundamentals of the problem have changed considerably. There is now no longer any room for doubt. For numerous convergent reasons (rapid increase in ethnic, economic, political and  psychic ties), the human individual is finally drawn into an irresistible process directed  towards the establishment on earth of an interdependent organo-psychic system. Whether  we like it or not, humanity is collectivizing, totalizing itself, under the influence of physical and spiritual forces of a worldwide nature. Hence the new conflict, which is taking place in every human heart, between the human unit, who is ever more conscious of his individual value, and his social ties, which become ever more exacting.

On reflection, we realize that this conflict is only apparent. We now see that the human being is biologically not self-sufficient. In other words, it is not by self-isolation (as one might have thought), but by proper association with all other human beings that the individual can hope to achieve full development of his person (full development of energy and movement, and full development of consciousness particularly) since we cannot become completely  “reflexive”, each of us, except by reflecting ourselves in and taking reflections from other human beings. Collectivization and individuation (not autonomous, but personal) are therefore not two contradictory movements. The whole difficulty is to regulate the phenomenon in such a way that human totalization is carried out, not under the influence of an external mechanising compression, but through inner harmonization and sympathy.

From this new point of view it becomes immediately apparent that the object of a new definition of the rights of man must be no longer, as hitherto, to secure the  greatest possible independence for the human unit in society, but to lay down the conditions under which the inevitable totalization of humanity is to take place, in such a way as not to destroy, but to enhance in each of us, I will not say independence, but – what is quite a different thing – the incommunicable uniqueness of the being within us.

The problem is to cease organizing the world for the benefit, and in terms of the isolated individual, and to direct all our efforts toward the complete development (“personalization”) of the individual, by wisely integrating him within the unified group, which must one day become the organic and psychic culminating point of humanity.

When thus restated in terms of an operation with two variables (progressive, interdependent adjustment of the two processes of collectivization and personalization), the question of the rights of man does not admit of any simple or general answer.

At the least we can say that any solution envisaged must satisfy the following three conditions:

Each  human being has an absolute duty to work and personalize  himself.

Each human being has a relative right to be placed in the best possible conditions for personalization.

Each human being within the social organism has an absolute right not to be distorted by outward coercion, but to be integrated within the organism by inward persuasion, i.e. in conformity with his aptitudes and personal aspirations.

These three points must be made explicit and guaranteed in any new charter of humanity.

Read more on Teilhard de Chardin in the Courier, November 1981.

A Bold vision of the universe

A French philosopher, palaeontologist and geologist, Pierre Teilhard de Chardin (1881-1955) was a Jesuit priest whose work was a blend of science and Christianity.