"Ignorance of each other's ways and lives," reads the preamble of the Constitution of Unesco, "has been a common cause throughout the history of mankind of that suspicion and mistrust between peoples of the world through which their differences have all too often broken into war."

For the past 21 years the Unesco Courier has sought by text and image to combat this suspicion and mistrust between peoples by telling the unheadlined story of men and women of different lands who are working together to conquer ignorance and disease, reduce racial prejudice, raise standards of living and foster better understanding of other peoples' ways and lives: in a word, to serve as a window opening on the world of education, the sciences, the arts, and communication, and the problems concerning the nations of the globe in seeking to resolve them.

This special issue brings together a necessarily small selection of the many articles and features that have appeared in the past two decades. It is in no sense a history of Unesco. All articles have been shortened, sometimes drastically, and many articles have had to be omitted though they certainly deserve a place in this anthology. 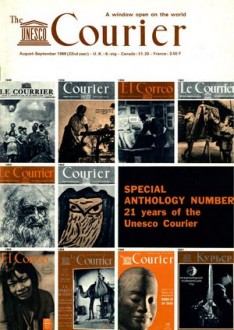