The Food we eat

Without enough of the right kinds of food, nobody can be healthy. This simple truth holds the explanation of much of the misery from which mankind suffers. A vicious circle has arisen poor health impairs productive capacity; low production of foodstuffs brings under-nutrition, sickness, less productive power.

Health means more than simply the absence of disease and infirmity, and enough food does not mean just sufficient to maintain life. Lack of essential food makes itself felt at the very least by general debility, slackening of initiative, and reduced resistance to disease.

The rapidly-developing science of nutrition has now established just how much of different kinds of food is necessary for health. A good deal is known also about in what particular ways the food eaten every day in many parts of the world falls short of man's requirements. This is only a beginning, however, and there remain many problems to solve before it can be claimed that the world's food is really serving the world's health needs.

To provide food for under-nourished peoples in adequate quantity, vast efforts in both production and distribution are required. These are problems with farreaching economic implications.

Even where staple foods are available in fair quantities, malnutrition very often still exists because certain essentials (proteins, vitamins, etc.) are not present in the right quantities. This lack of the right foods for health is an even greater difficulty than shortage of staple foods, for it involves not only assuring necessary supplies, but also bringing the community to understand and accept the advantages of using them.

In the case of certain of the deficiency diseases such as beri-beri, rickets or kwashiorkor, it is fairly easy to demonstrate the advantages of a properly balanced diet. However, many of the beneficial effects are less evident, and make themselves felt as a gradual improvement in health and well-being, especially among children. The difficulty is that people do not easily forsake food habits and beliefs that are a part of their cultural or religious heritage simply because somebody comes along and tells them that, perhaps for generations, they have been eating the wrong things or not eating the right ones.

As well as the evils that arise from shortage and poverty, there. are the problems of plenty. Surplus production in some parts of the world cannot, for economic reasons, always be used to compensate for shortages in other places. Where food is abundant, moreover, there are very real health dangers from overeating, particularly of certain fatty foods which are now believed to predispose to disease of the heart and the blood vessels.

As countries become more highly organized, economically and socially, the use of preserved foods and largescale food processing tends to become more common, aggravating the risks of widespread food-borne infections and food poisoning.

It is, I think, clear that the relationship between food and health has become a very close and intricate one, and that we can no longer let ourselves be guided simply by the customs and beliefs of earlier generations. There is no area of the world, no country and no culture which today can afford to neglect the scientific teaching now available on nutrition, food values, and the techniques of producing and processing food. World Health Day, April 7, 1957, will, I hope, serve as an occasion for people and governments everywhere to think seriously about this situation. 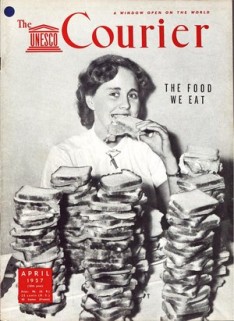