Film making; no longer the privilege of just a few nations

Unknown and unhonoured until recently, the Japanese cinema industry today leads the world in the production of feature Alms. Before 1951 few were the persons outside of Japan who had seen a Japanese motion picture. But in that year, for the first time since 1940, Japan showed some of its productions at an international film festival held in Venice, and Rashomon walked off the premier award an event as unexpected to most Japanese as it was to many Western observers unacquainted with the high standards achieved by the Japanese film industry.

Since then Japan has won considerable international acclaim and with 443 films released in 1957, it has become the first country to jump ahead of the United States in output. Here are the latest figures for 1957 of the "Top Five Producers" just compiled by UNESCO:

It is worth noting that of these "top five" producers, three are Asian countries.

Although motion pictures are shown regularly for entertainment in nearly every country of the world it is only in very recent years that information has become available on anything approaching a world-wide basis to indicate the scale of film activity in different countries. Even today such information is often scanty and incomplete.

As a UNESCO study, Film and Cinema Statistics, published a few years ago pointed out: " When it is considered that the number of commercial cinemas in the world is greater than 100,000, that world cinema attendance is in the order of 10,000 million per year, that some 2,000 long films are produced every year, and that the annual turnover of the world's film industry must be close to 4,000 million dollars, it is surprising, to say the least, that an activity involving such amounts of capital, labour and leisure should be so unusually poorly documented."

Since 1947 UNESCO has been collecting information on the status of the film industries in different countries and has issued various publications on this subject. It is with this material at his disposal, along with data from other sources, that M. Georges Sadoul, the great French authority on the history of the cinema, has prepared the survey published on page 10 which reveals the new and often unsuspected horizons of the world cinema of today. 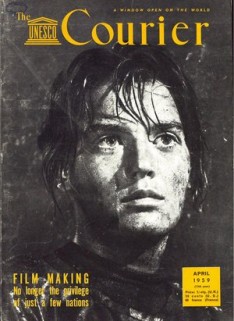