In 1948, workers draining the Maliq marshes in southeast Albania discovered potsherds, horn tools and small flint knives embedded in the mud of a drainage channel. Quite by chance they had stumbled across an important prehistoric site. To appreciate the significance of their find it is essential to understand the existing state of Albanian archaeology and current theories on the history and civilization of the lllyrians and their direct descendants, the Albanians.

In Ecuador, addressing the Royal Geological Society in London just over a century ago, Sir Roderick Murchison, a well-known British geologist declared: "There was human civilization... in South America at the time of the older Stone Age in Western Europe." Sir Roderick based his statement on the discovery of some ceramic vessels and gold figurines that James S. Wilson had unearthed two years earlier, in 1860, at an archaeological site on the coast of Ecuador. The site of the discoveries was the scene of the first known "geological tragedy" in that part of the South American continent which was destined to become Ecuador. It consisted of a stratum of vegetal loam covered over with a thick layer of marine deposits, indicating that the Ecuadorian coast was once inhabited but then sank into the sea, only to rise again thousands of years later.

In China,in April 1972 an early Handynasty tomb dating from the second century B.C. was discovered at MaWang-T'ui in the eastern suburb of Ch'ang-sha, In Hunan Province. MaWang-T'ui is a mound more than fifty metres across and more than twenty metres in height. In the tomb beneath the mound was discovered a woman's body in an astonishingly good state of preservation. The body, swathed with twenty layers of silk and gauze, was half immersed in a reddish fluid.

In Bulgaria, "it grows but does not grow old." This motto, displayed on the arms of Sofia, is an apt description of the evolution of that ancient city in the heart of the Balkans which continues to modernize and look to the future while preserving its 7,000 years-old links with the past. The central part of the city, which is still in the process of change above ground, extends over the buried remains of several civilizations, comprising strata of ruined cities to a depth of 10 metres. From the now scarcely identifiable traces of an ancient Thracian settlement to the vestiges of later cultures, the whole of this archaeological complex records the troubled history of a city often besieged by invaders and destroyed several times.

Discover the art and the archaeology of Albania, Ecuador, China and Bulgaria in the UNESCO Courier. 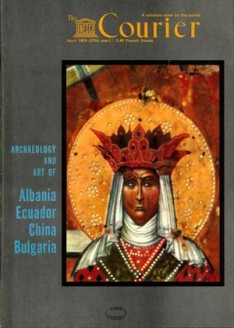