Flood-tide or balanced flow? A world debate on information

In whose hands are the media in the modern world? What are the sources of the information they transmit? In what directions does this information flow? Are the "producers" of information also its "consumers"? Do not the scale, the power and the sophisticated technology of the modern media mean that mass communication is a privilege that only the rich countries can enjoy? Does this in turn imply a new form of domination, more subtle than its predecessors, but terribly effective, nonetheless? If the flow of information is "one way only", what chances do the poor countries have of exercising a "right of reply"? What hopes are there of restoring the balance of communication and information on a world-wide scale?

Overtly or implicitly, these vitally important questions were at the centre of many of the debates which took place during the 19th session of Unesco's General Conference at Nairobi in October-November 1976. Thanks to the press, the echoes were heard around the world, and it is probable that in the coming years the problems of world communication will continue to preoccupy the international community and influence the dialogue between North and South.

This issue of the Unesco Courier is thus concerned with a subject which during the past few months has become more topical than ever. It presents a dossier which is far from complete but whose contents will, we hope, throw some light on the problem and help our readers to appreciate not only its size and complexity, but also the diversity of the points of view involved. On the following pages we present:

In addition, we publish two articles of a "documentary" nature, setting outunder the responsibility of their authors alonetwo broadly different notions of the role of information, as conceived by specialists from the U.S.S.R. and the U.S.A. 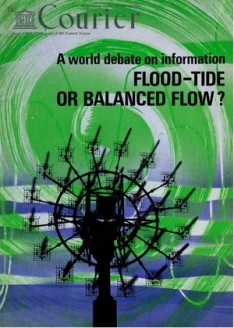