Since 1945 the disaster of a third world war has been avoided; but at what price has this been achieved? For how many days have the guns been silent throughout the world? Although the field of conflict has shifted towards the poor countries, children, whose lives are no less precious than anyone else's are still dying as a result of war.

Yet the nations, that in this twentieth century alone have sacrificed more than 100 million human beings on the altars of war, continue, as if caught up in the gears of a runaway machine, to dissipate a vast proportion of their genius, of their energy, of their resources, on the manufacture of lethal weapons, ever more sophisticated and devastating. To these nations, the question of disarmament represents an unavoidable challenge.

If we take up this challenge, not only will mankind be delivered from the menace of a hecatomb without precedent but it will also acquire the means to win the struggle against poverty, sickness, ignorance and the other afflictions which beset so many peoples.

If only a proportion of the material and human resources devoted to preparation for war were assigned to the cause of development, it would suffice to change the face of the earth, lessen the widening gulf between rich and poor countries, and reduce the areas of poverty which continue to exist in many industrialized countries. A great number of essential activities, in the fields of nutrition, health, literacy, the development of education, the training of scientific and technological personnel, the establishment of research centres, cultural development, and the safeguarding of the environment, are curbed or even blocked, solely for lack of material resources. This in turn aggravates inequalities, and brings about new situations of tension.

And so in addition to the development of nuclear weapons we have the armaments race in so-called conventional weapons, which extends to the smallest and poorest States. Thriving on injustice, and representing a further manifestation of selfishness in the world today, this race, in turn, brings into being terrifying world-wide interests linked to arms industries, multiplies the risk of a world conflagration, and provides fuel for the flames of conflict.

The arms race is not only fraught with the most terrible danger to human life; it also determines investment choices and sets a premium on economic structures which, having become essential to the life of nations, subsequently make it all the more difficult to carry out the conversion of the arms industry to non-military activities.

The countries whose high level of development enables them to influence the crippling economic and social process of the arms build-up have a special responsibility towards the international community and to the small and medium States which at present can do no more than submit to decisions which have been taken elsewhere, even though they involve their future.

For Unesco, the essential task is the creation of a growing movement of world public opinion which is conducive to disarmament and peaceful co-operation. One of our essential objectives should be to work towards the inclusion of education on disarmament in courses, not only at school and university, but wherever knowledge or skills are acquired.

What has to be done, above all, is to ensure that the burden implied by any war and the enormous benefits of peace are better understood so that public opinion can throw its full weight into the balance and can support governments in the movement towards disarmament.

We have to persuade and convince and appeal to reason and common sense, but we also have to call on people's generosity and a clearly realized sense of solidarity that stands to benefit one and all. It is a long drawn-out, difficult and at times unrewarding combat, for guns have to be silenced by ideas, but it is a combat on which all the world's hopes are staked. 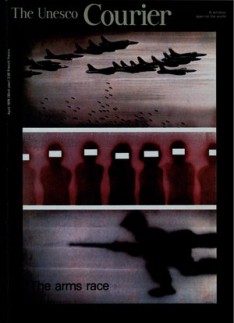