Fifteen hundred years ago a small trading settlement was founded on the banks of the river Dnieper. It became the nucleus of Kiev, the great city which is today the capital of the Ukraine, a Soviet Socialist Republic with a population of 50 million. But the Ukraine is not alone in celebrating this anniversary, for as well as being the metropolis of the Ukrainian people Kiev has also been the cradle of the cultures of two other great eastern Slav peoples, the Russians and the Byelorussians. For centuries its influence spread even further, as it became a crucible of civilizations whose links extended to the Byzantine empire and the kingdoms of western Europe, to the peoples of the steppes, to Iran and to the caliphate of Baghdad.

The anniversary offers a natural opportunity to review the great moments of Kievan history, which began when the city rose at the cross-roads of great medieval trade-routes. In 988 came a decisive moment when prince Vladimir officially introduced Byzantine Christianity, an event which would shape the cultural and political development of the Slavs for centuries. From the 10th to the 13th centuries Kiev enjoyed a glorious period. This was the age of the greatfairs, a time when envoys seeking alliances travelled to the city from all the courts of Europe. Palaces and churches mushroomed some 400 churches burgeoned around the most beautiful of them all, the cathedral of St. Sophia with its magnificent mosaics and frescoes. In the 16th century Kiev was a focus of the confessional and ideological rivalries which convulsed Europe. The resistance it organized then gave birth to an astonishing literary flowering. In the 19th century there was an intellectual renaissance whose most celebratedfigure was the poet Taras Shevchenko.

But however rich it may be, the past alone is not enough to define the character, spirit and dynamism of a city and its people. Attached though they are to their history and determined to safeguard the monuments which enshrine it, the Kievans are equally concerned with the expansion and embellishment of their city (which with over 2,300,000 inhabitants is the third largest in the Soviet Union). They are constructing its future in schools, universities, libraries, cultural centres and research institutes which specialize in the most advanced disciplines of science and technology.

Another anniversary being celebrated this year is the centenary of the birth of the Irish novelist James Joyce. Today Joyce is established as one of the great writers of this century, but he remains an exacting one. "The demand that I make of my reader", he once said, "is that he should devote his whole life to reading my works". In Ulysses (1922) he set out to focus all human experience and to celebrate the whole of human culture in the events of a single day in Dublin. When it appeared, Ulysses was pilloried in many quarters not only because of the frankness with which it described aspects of life about which novels written in English had until then generally been silent, but because of its experimental techniques and its unfamiliar use of words, myth and symbol. Finnegans Wake (1939) demands of the reader an even more exorbitant interest in language. It would be hard to think of a more daunting challenge for a writer than that of introducing Joyce to the readers of a magazine published in 26 language editions. We felt that if anyone is qualified to take up this challenge it is the British writer Anthony Burgess whose lifelong devotion to Joyce has been expressed in many books, broadcasts and articles.

Another glorious chapter in world literature is also discussed in this issue: the poetry which blossomed in Muslim Spain (al-Andalus) and which is associated with the names of the poetking AlMu'tamid, Ibn Hazm of Cordoba and Ibn Quzman. Their achievement is described by Emilio García Gómez, an internationally known specialist in Arab civilization. 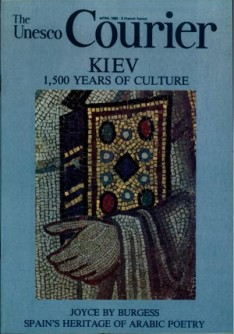