This year marks the end of the United Nations Decade for Women: Equality, Development and Peace. At the World Conference to be held next July in Nairobi, Kenya, delegates from United Nations Member States will draw up a balance sheet of the results obtained and of the problems which remain unresolved the many forms of discrimination to which women are still subject both in practice and under the law.

In this issue of the Unesco Courier we present three articles which deal respectively with the common traditions which restrict the rights of women in Mediterranean societies, with the situation in Latin America where women themselves have given priority to participation in political and social struggles over the fight to achieve their emancipation and to establish their "identity", and with the triple oppression as women, on grounds of "race" and of class to which women are subjected under the apartheid regime of the Republic of South Africa.

Also in this issue we commemorate the tercentenary of the birth of Johann Sebastian Bach, whose music, little appreciated in his own time, seems to us today to be imbued with the power of "memory and prophecy". We salute as well the centenary of the birth of Niels Bohr, a pragmatist of genius who helped lay the foundations of modern physics. In a further article we examine a question that preoccupies a number of Unesco Member Statesthat of the need to extend to folklore the protection already afforded to other art forms. Unanimity has yet to be achieved on the appropriate international action required to provide this protection. The study we present of Bartolomé de Las Casas, the "Apostle of the Indians", demonstrates the astonishing freshness of the thought and actions of this 16th-century Spanish prelate whose opposition to slavery and insistence on respect for cultural differences as the basis of liberty and peace remain of topical interest today.

Finally, as a postscript to our March issue on the urban explosion, we present a pen portrait of Cartagena de Indias, which since November 1984 has been included on the World Heritage List drawn up under the auspices of Unesco. This old Colombian town and seaport, which for four centuries withstood the savage assaults of Caribbean pirates, continues today to resist the excesses of modern urbanism and to retain its old-world charm and its soul.

Other women's issues in the UNESCO Courier: 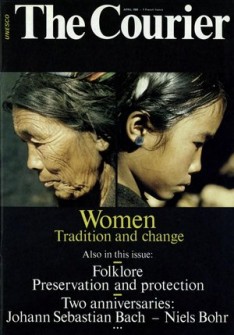