In pursuit of the past: the making of history

In his famous Histories of the Graeco-Persian Wars, Herodotus recorded a struggle for dominance in the ancient world that spanned almost a hundred years (c. 546 to 448 BC). From its pages there gradually emerges a portrait of the "Greek identity", or rather paired portraits of Greek and "Barbarian", since there can be no "We" without a "They".

It is not surprising, therefore, that Cicero called Herodotus "the father of history", since, whether they are concerned with the immediate or the distant past, historians inevitably come up against the question of identity, to the extent that the role and standpoint of the historian might well be defined in terms of this question. This is why the Editors of the Unesco Courier have taken reflection on the past, and more particularly on historical identity, as the theme of this second issue devoted to world historiography.

Herodotus was a man of the ancient world but, closer to our times, history and identity have become ever more intricately intertwined. For the peoples of the former colonies, the doubly difficult question is how to take back full possession of a past that the colonizers often exhumed and, in almost the same breath, destroyed, rediscovering it but judging it in terms of their own history.

Nineteenth-century European historians were obsessed with national unity, a notion which they approached from different angles but with a passionate, common desire to discover and promote it. Michelet favoured the direct approach, seeing France personified rising up before his eyes. Mommsen, less direct, was fascinated by the analogy between the ancient Roman Republic and its success in creating a united Italy, and nineteenth-century Prussia fulfilling the same role in Germany.

In the turmoil and confusion of today's world, at the threshold of a new beginning, the major task of historians, using tools, techniques and criteria appropriate to their discipline, is surely to examine the notion of identity and to define new identities. Throughout the modern world, the boundaries of identity, whether physical or symbolic, are breaking up and becoming entangled and inflamed. Meta-identities (Arab, European) and mini-identities (regional, ethnic, religious) are being simultaneously invoked. Identity, it would seem, is a concept in a state of perpetual re-assessment and re-creation.

No definition of identity can fail to take the past into account, but a definition that is based simply on a return to a "lost" past identity is pure illusion and could lead on to bloody consequences. It is perhaps at this point, where past and present interlink, that historians have a special contribution to make; for not only do they work with and in terms of time, they also have to think themselves into its successive stages.

As the French poet René Char once wrote: "No will or testament bequeaths to us the heritage of history." 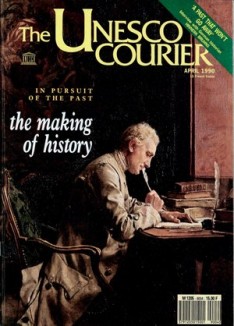