To dominate an anguish shared by all mankind, each culture has shaped its own conception of time. These conceptions have found expression in myths, epics and works of literature in which symbolic structures are used in an attempt to come to terms with the ephemeral and the eternal.

As the French philosopher Paul Ricoeur suggests in the present issue, this symbolization constitutes "human time". It has produced a wide range of systems for organizing temporal experience. We have tried to give some idea of this diversity by citing examples from very different societies.

But as well as experiencing time, human beings in a sense affect time, if only through the invention of the quartz and atomic clocks which have revolutionized our capacities for measuring it. The same time-system now holds sway ' throughout the world. Perceptions of time rooted in the religious beliefs of many cultures are retreating in face of an invasion by electronic timekeeping. This crisis can be seen in the context of a more general crisis about the purpose of life and the values that govern it.

From the diversity of cultural expressions of time to the way in which they are being modified by sophisticated measuring devices, this issue is inspired by Henri Bergson's famous remark: "Time is invention or it is nothing." 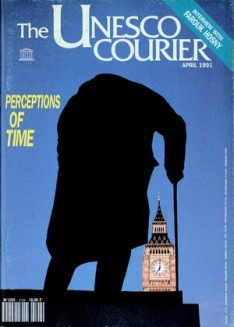