A Time to love

In a sense the theme of the present issue has dictated the form of its treatment giving carte blanche to a number of writers from different parts of the world.

We have long wanted to publish an issue devoted to the subject of love as it is experienced in the modern world. We thought about it, asked around, tried first one angle, then another and yet another. But the theme proved to be particularly elusive: the authors we approached either backed off or, if they accepted, turned in pieces far different from what we had expected. It became clear that love could not be treated conventionally like any ordinary topic, with a structured list of contents and following predictable lines of enquiry. We finally came to the conclusion that it not only needed but deserved special treatment, a different approach.

We decided to ask ten different writers a single question what do you want to say about love today? and let them get on with it, giving them an entirely free hand.

The result was a set of contributions that were totally different from anything we could have imagined at the start, and went far beyond what we might have hoped for. Thanks to their talent, intuition and experience, the ten authors, given their head, had managed, in a series of lucid, inspired improvisations that caught the right notes to render the tremulous music of loving today.

We received pieces on the power of the love that scoffs at barriers of class, race and frontiers (André Brink) or that comes to terms with racial intermingling and finds a universal sense (Henri Lopes); the magic of a love that exorcises the alienation of the exile Q.M.G. Le Clézio) or that ultimately becomes one with the love of life itself (Luisa Futoransky); the fullness of a love to which the whole being is committed, body and soul (René Depestre); the paradox of love whereby the philanderer, always in pursuit of his prey and never tied down, yet finds himself less free than ever (Tahar Ben Jelloun); the ambiguous myths of love, reinvented by Hollywood as an antidote to the everyday world (Jerome Charyn); love as a metaphor for the submission of a humble Indian librarian to a careerconscious woman politician (Nina Sibal); love breaking free of childhood dreams, trying in vain to enter the world of the present (Mahmoud Hussein); and lastly, love abandoning the pretence of being everlasting, accepting that it is transient and bounded by time (Jorge Enrique Adoum).

We were still left with a difficult problem: whether to publish everything as it stood, even things that seemed to some of us inappropriate or extreme, even what was expressed in terms that the Courier could not endorse.

The answer was, and could only be, yes. Not only because it was the price to pay for freedom of expression, but also because that freedom had succeeded where our own concern with planning had failed. The result is the present issue. 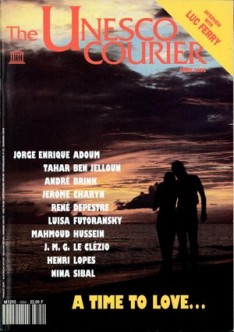