The Origins of writing

It may, on the face of it, seem strange to look back at the origins of the world's diverse forms of writing at the very moment when a universal new system is being born before our very eyes. Unimaginable not so long ago, computerized script has become part of our daily lives, promising access to the dazzling new world of information, learning and communication that we described in our February issue on "the multimedia explosion".

Some think that this new electronic script will replace all earlier writing systems and consign them to oblivion. Are they right?

While the present issue of the Unesco Courier does not pose this problem in such specific terms, its contents suggest that the answer to it will probably be "no". By shedding light on the great variety of forms and techniques used to make the spoken word "visible", it shows how close and intricate is the relationship between a language and the writing system used to record it. Arabic would not be Arabic if it were written in Chinese characters. Turkish is not the same language when written in Latin script. The death knell starts to sound for a language when its writing system disappears because a language, it script and its music belong to a single aesthetic.

The subject of writing takes us into one of the deepest recesses of a people's identity. Learning to write has always been a key stage in the process whereby a person gains access to the collective memory and becomes a full member of the national community, part of its fabric of complicities and conflicts.

Tempted by the boundless possibilities for travel, exchange and new experiences offered by globalization, will late twentieth century people continue to feel this need for roots, this desire for familiar faces, landscapes and rhythms? We think they will. The further they go, the more they will need familiar landmarks. The more exposed they are to communication that is rich in information but poor in meaning, the more sustenance they will need from the roots of their own cultures. The written language, drawing its vitality from the works produced in it over the centuries, can safeguard this heritage and defend it against the growing threats of anonymity and oblivion. 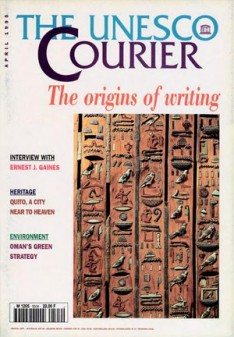