Next September, experts, civil society and government representatives will meet in Mauritius to assess the health of the world’s small island developing states. The meeting follows up a conference held in Barbados in 1994, which listed 15 areas where these islands are exceptionally vulnerable and where national, regional and international action was felt to be urgent. Has the situation improved in the ten years that have lapsed? Journalist Peter Coles travelled out to the Pacific for the new UNESCO Courier to see how island populations in that part of the world are coping with the changes being brought about by climate change and rising sea levels, for example, or increasing urbanization with its impact on traditional lifestyles and cultures, AIDS and mass tourism. The resulting dossier, presented in this issue, indicates that while paradise is perhaps not lost, the challenges facing island inhabitants are still daunting than ever.

Daunting also the scenario presented in the interview with Chris Thomas, the lead author of the most comprehensive study ever done on the effect that climate change is likely to have on biodiversity; a study that foresees mass extinctions, perhaps on par with the event that wiped out the dinosaurs. Among the species under immediate threat – this time from habitat destruction, civil war, hunting and poaching – are humanity’s closest relatives, the Great Apes, which are the subject of the photo reportage in this issue’s Zoom. An international effort, to which UNESCO has lent its weight, is underway to save the world’s gorillas, chimpanzees, orangutangs and bonobos. If it fails, say the experts, the Great Apes could disappear within 50 years.

If these articles sound alarms and signal the need for action, other stories in this issue provide proof of the human brilliance and ingenuity that will be needed to solve the problems facing our societies. The work of Christine Petit, one of the five laureates of this year’s L’Oréal-UNESCO “For Women in Science” Awards, is a source of hope for millions of deaf people around the world. Inspiring also, is the way that the international community has pulled together to help the beleaguered population of historic Bam in Iran, following the devastating earthquake that destroyed much of this remarkable site last December. UNESCO is working with the Iranian authorities and many other partners on the ancient city’s possible reconstruction. Similarly encouraging is UNESCO’s Initiative BABEL which is working to develop the use of all languages and scripts in modern communication technology, including the internet, both breaking down communications barriers, celebrating our extraordinary cultural diversity… and showing what can be done when there there is the will to make change happen. 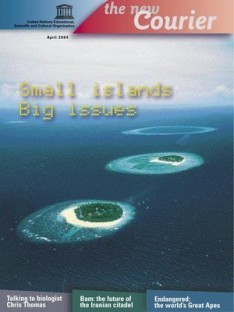