Youth in new Japan; how much have they changed?

Not long ago, the famous American battleship Missouri the "Mighty Mo" as she was called was placed "in mothballs" and retired from the United States naval service. It was on her quarterdeck, on September,1945, that Japan accepted the Allied surrender terms and acknowledged the defeat of militarism.

Nearly nine years have passed since the surrender ceremony took place in Tokyo Bay; and while time has transformed the once "Mighty Mo" into a "ghost" ship, it has brought revolutionary transformations to post-war Japan.

Since their defeat, the Japanese have been looking at a new way of living de-mok-ra-sie. New types of behaviour and new modes of thought have grown up in competition with the traditional forms. The old Imperial régime and everything stemming from or connected with it have been profoundly altered. To all appearances, the only thing left is a façade, with the steel framework and structural depth gone.

The Emperor remains, but only as a symbol of national unity. Sovereignty has been restored to the people. Laws concerning the family and inheritance as well as the legal status of women have entirely changed. Socially and economically a profound revolution has been brought about by agrarian reform and the dispersal of the Zaibatsu (trusts). Militaristic Shintoism the State religion has been abolished, and the nation's educational system has been entirely recast. By an explicit provision of the new Constitution, the army has been completely abolished. No fragment survives of the incomparable metal the Samurai sword was forged from; the chrysanthemum, emblem of the Imperial House, disappeared entirely.

In the face of such a total upheaval, where did the youth of postwar Japan stand and what were their feelings and attitudes to the changes? Were they really a new generation "without the chrysanthemum and the sword?".

In 1951, Unesco began a great enquiry into the subject. Two Europeans Jean Stoetzel, a French opinion poll expert, and Fritz Vos, a Dutch Japanologist joined a team of Japanese including Eizo Koyama, director of the Japanese National Public Opinion Research Institute (NPORI), Takao Sofue and Feiichi Izumi, both of the Japanese Association of Cultural Science.

The investigation was undertaken in several parts. The most comprehensive was carried out by the NPORI through a representative sampling poll of youth all over the country. Other more specialized surveys were made in selected areas: on the southernmost island of Kyusku, with its reputation for traditionalism, and the northernmost island of Hokkaido exactly the opposite. Students in Tokyo, Kyoto (a rich cultural centre) and Sapporo (seat of the University of Hokkaido) were also specially questioned. Persons interviewed ranged from the son of a purged general and the fatherless student of a middleclass family whose mother was a labourer, to the secretary of a miners' union and young fishermen living on the northeastern tip of Hokkaido within sight of the Kuriles, who had to be reached by sledge across snowfields.

The Unesco enquiry has now been completed and its findings are reported in a 300-page study by Dr. Stoetzel. Though the enquiry covered all age groups it focused attention on youth, 15 to 25, who make up one fifth of the population or 15 million persons; two-thirds of whom are country dwellers. In this group all boys and girls attend school up to 15; about half of both sexes are employed between 15-20 years; and a small minority continues studies after 20.

The questions put to the young men and women of Japan covered almost every aspect of their life, but they were especially grouped around a few main themes: what Japanese youth think about foreigners; their attitudes toward higher authority and their country's institutions; their attitudes toward tradition vs. social change and the personal values they most treasure.

The answers can help us assess New Japan's chances of evolving along democratic lines or reverting to some form of totalitarianism. For if the young people of Japan have become self-reliant and independent, if their thinking shows confidence and assuredness, if they have found the strength to cast off the heavy burden traditionally placed on them by the state and their family, then the cause of democracy will be safely guarded in Japan by the citizens of tomorrow. If not, then quite different political inferences can be drawn.

The Unesco investigation was not a political study, however. The primary aim was to try and reduce the enormous distances still separating Japan, its people and its customs from other countries. It was part of the much vaster Unesco programme for promoting understanding between peoples. International goodwill and a co-operative spirit are not enough in themselves; they must go hand in hand with accurate knowledge about the different peoples of the world.

In the case of Japan, insofar as Westerners' minds are not a complete blank on the subject, their knowledge mostly boils down to a collection of arbitrary clichés whether favourable or not stemming from misleading propaganda, the warped judgment of political events, or inaccurate books.

In the past, the Japanese people have been described by certain individuals as "two-faced", "crafty", and "bellicose". Such stereotyped opinions are largely based on ignorance and the emotions of those who expressed them suspicion, hatred and anger.. They are purely subjective and unrealistic and false.

It must be admitted however that it is no simple matter to "understand" a nation whose whole social structure, way of thinking and philosophy of life are poles apart from one's own.

As Jean Stoetzel poses the problem, "For a foreign observer, Japanese behaviour, like that of other peoples... is on three different planes. First there is the exotic plane the one that strikes the tourist, and which Herodotus delighted to note in his descriptions of Egypt." And he cites the Japanese author, Atsuharu Sakai who in his book "Japan in a Nutshell" lists 58 contrasts between Japan's customs and those of the West. Here are a few: Japanese strike matches away from them, wear white for mourning, write from top to bottom and from right to left, touch their nose when they say "I" or "me", beckon with palms downwards.

"The second plane", continues Dr. Stoetzel, "isthat of 'human nature"... this is normally the plane on which relations with strangers are established and interchanges between peoples of different cultures are possible.

"Below these however, there is a third plane, deeper in a sense than the others, where the motivations, values and mechanism of the individual are to be found. While something very near to understanding can be achieved on the second plane, the true and full interpretation of behaviour can be obtained only on the third." But even Dr. Stoetzel, who states that the aim of the authors of the Unesco enquiry was to penetrate that third plane, frankly admits "We cannot say that we have entirely succeeded."

Whatever the plane, however, any understanding of the Japanese must accept their right to think and* behave like Japanese. Thus, the Japanese consider all pleasures legitimate provided they are given minor importance, but they reject as scandalous the pursuit of happiness as the serious purpose of life. In fact the word "happiness" has no exact equivalent in the Japanese language.

Many terms such as freedom and slavery, good and evil, happiness and misery, democracy and totalitarianism which the West accepts as clearcut opposites are often pointless when applied to Japan.

On the following pages, we present some of the findings of the Unesco enquiry on post-war Japanese youth. 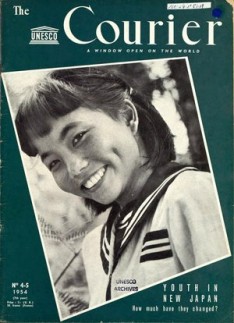