Among the more than five billion. women, men and children living on our planet, no two individuals are alike and the same is true of cross-pollinated plants as well as animals and microorganisms. This kaleidoscopic diversity, which exists in all living beings, provides the basis for biotechnology, which may be described as the technological modification and improvement of living organisms.

The rediscovery of Gregor Johann Mendel's laws of heredity in the early part of this century helped promote an understanding of the origins and workings of genetic diversity. The principal phenomena involved are segregation, mutation and recombination of genes. Together, these three actions generate opportunities for the immense genetic diversity in living organisms.

In the past, the existence of genetic variability enabled humans to select plants and animals for domestication. Over 10,000 years ago, plants such as wheat, barley and rice were selected for cultivation from the wild flora. After their initial domestication, these crops were continuously improved through selection of naturally occurring variability. In plants like fruit trees and the potato, occasional mutations gave rise to new varieties. Thus, today, we not only have over 1.5 million species of plants and animals, but also a large number of genetic strains within species. For example, more than 100,000 varieties of rice are grown in different parts of the world.

From the beginning of this century, techniques such as planned hybridization and later, the induction of mutations, were used by agricultural and biological research institutions to create new genetic combinations. Hybridization also became a method of increasing the growth of crops and animals, a phenomenon known as hybrid vigour. Hybrid maize developed in the United States in the 1930s helped to double maize yields. The identification of genes for a semi-dwarf plant type in wheat in Japan and in rice in China in the 1940s provided the raw material for the green revolution witnessed in these crops in Asia in the late 1960s. Identification and utilization of genetic mechanisms for male sterility in plants made the commercial exploitation of hybrid vigour possible even in a self-pollinated crop like rice. Today, hybrid rice occupies nearly 18 million hectares in China.

Biological diversity thus became the basis of continuous improvements in productivity. Selection, mutation and hybridization were used to improve plants, animals and microorganisms of interest to agriculture, industry and medicine. Thus, new antibiotics and vaccines could be developed. Fermentation technology made rapid strides. Classical biotechnology involving non-molecular techniques is responsible for many of the improvements witnessed in scientific endeavours involving living organisms.

Against this background, we may examine the new vistas opened up by molecular biology. This area of science was inaugurated by James Dewey Watson and Francis Crick forty years ago when they described the double helix structure of the deoxyribonucleic acid molecule, commonly known as DNA. Since then, emphasis has shifted to the study of the molecular basis of genetic diversity and to the standardization of methods that can help achieve novel genetic combinations through what are known as recombinant DNA techniques, whereby scientists use tiny circular pieces of DNA known as plasmid vectors to achieve gene splicing. These techniques have opened up a new world of genetic engineering, leading to the creation of transgenic organisms containing genetic material into which DNA from an unrelated organism has been artificially placed. They are already being used in the production of insulin, interferon, and human growth hormone. Although the term "biotechnology" is used to denote a wide range of procedures such as cell and tissue culture, micro-propagation and fermentation, the hard core of modern biotechnology is genetic engineering.

The birth of an industry

Present-day biotechnology, which combines conventional and molecular techniques, has every prospect of becoming a great industry. In addition to already existing applications in health and medicine, large-scale uses in agriculture, industry, energy supplies, environmental protection and the exploration of space are becoming exciting possibilities. Biotechnology will probably provide the key to producing more food and other agricultural commodities from less land and water in the twenty-first century without the adverse ecological implications associated with the high doses of mineral fertilizers and chemical pesticides being used now to make high-yielding varieties of rice, wheat, maize and other crops express their full potential.

Many transgenic plants are currently under field testing in several parts of the world. Early applications of recombinant DNA methodology gave rise to micro-organisms that can clean up oil spills. This led to the birth of bioremediation technology, which has been widely used to treat the problems of "oil lakes" created by the 1991 Gulf War. In fact, biotechnologies have opened up unlimited opportunities for the purposeful use of biological diversity. For example, at our Research Centre in Madras, we are assembling a gene pool for breeding crops for tolerance to salt-water intrusion. Mangrove trees that inhabit intertidal regions along the shore have such genetic traits. When we have enough scientific knowledge, it may be possible to transfer genes for salt-water tolerance from mangrove trees to other plants. Such research is important due to the possible rise of the world's sea level in the not-so-distant future.

Microbiological enrichment of cellulosic wastes can be an important source of animal feed, particularly where farm animals are reared under stall-fed conditions. Biomass refineries are now being established in several countries.

Questions of safety and ethics

New research tools always generate hope and fear, and questions about safety and ethics have kindled public concern about biotechnology. Critics fear that "playing God" with living systems may create an environmental or medical disaster, or lead us to interfere with human nature itself. This is why countries with a significant biotechnology programme also have strict biosafety regulations. Committees dealing with ethical issues also exist in many scientific organizations.

Another issue of public concern, particularly in developing countries, is the use of basic genetic material from plants from these countries by private seed companies in industrialized nations solely for private profit. Since most biotechnological research in industrialized nations is in the private sector, and the private sector depends on developing countries for genetic resources, questions relating to systems for patenting and monetary compensation are the centre of widespread international attention. This was reflected in the Global Biodiversity convention signed by over 150 nations at Rio de Janeiro in June 1992.

Besides providing the foundation for global food security and for sustainable livelihoods, the wise use of biotechnology and a broader understanding of both conventional and molecular genetics could contribute to the elimination of irrational beliefs and prejudices about the dangers of diversity. These societal benefits may ultimately be the most significant contributions of modern biotechnology. 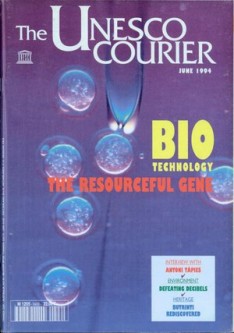