Spotlight on the world of books; 5000 books a year

Over 60 countries throughout the world publish books, and about 5,000 million books come off the world's presses each year. That at any rate is about as close as experts can place global book production for there is no general agreement as to what constitutes a book, and even the chief producing countries have failed to adopt a common definition.

The United Kingdom considers that a book is a publication priced at a minimum of sixpence (7 US cents). Ireland and Italy say a book must have at least 100 pages; in Iceland it can have as few as 17; Hungary lays down a minimum of 64 pages. Several countries, among them India, Indonesia and the U.S.S.R., do not distinguish between books and pamphlets and classify them all as books. U.S. book statistics exclude all pamphlets and government publications not sold commercially.

In addition, there is little agreement as to how the production, export and import of books should be recorded. In most countries, it is impossible to estimate accurately the production of books by copies because no one has any precise idea about the production of cheap reprints — paper-backed pocket books, etc. And in their export-import figures, many countries lump books with unknown quantities of other printed matter. Others again, exclude postal book exports and consignments below certain values which play an important part in world trade in books.

Unesco is working to secure agreement among governmental and other bibliographical agencies on these questions. For example, it has recommended that a book be defined for statistical purposes as a "non-periodical publication containing 49 or more pages"; that both books and pamphlets be included in total annual production, as is now the general practice, but that they be recorded separately; that government books, academic papers, reference books, atlases should be included (also under a separate heading) provided they are sold commercially; and that textbooks should not be excluded from national book statistics. On the other hand, it has recommended that governments should include book post exports and all other consignments of books however small they may be.

Unesco has turned the spotlight on other problems affecting the book trade and the international flow of books. "Books for All," its latest survey of the book trade, reveals that three quarters of all books come from only ten countries, that nine-tenths of all books are produced in only eight languages, and that seventy per cent of the world's translations are made in only four languages.

To this unbalanced and often confused situation is added the complexity of trade barriers to books. Twelve per cent of all countries levy import duties and 70 per cent impose currency restrictions on books. Less than half the world's postal administrations apply a provision of the Universal Postal Convention which allows books to be mailed at half the ordinary rate for printed matter. Unesco has sponsored an international agreement (now applied by 24 countries) granting duty free entry to books, and the Universal Copyright Convention which gives greater protection to authors and publishers. It is promoting the translation of representative works of literature into various languages, and working "to give the people of all countries access to the printed and published materials produced by any of them."

Discover more issues on books in the UNESCO Courier. 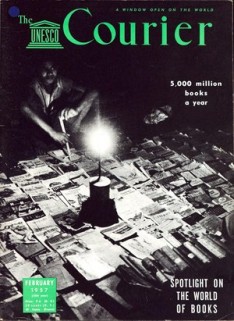