Birth of an island

As the New Year opens The Unesco Courier enters its twelfth year of publication. Five years ago it abandoned, its tabloid newspaper presentation and appeared for the first time in the present magazine format. Since then The Unesco . Courier has grown in stature and readership, and it is now recognized as the major medium of cultural exchange and of international education for Unesco. It is in fact the only international popular magazine of its kind sold -and read not only in Unesco's 81 Member States but in practically every country of the world.

The Courier is no|w published monthly in four separate editions identical in text, pictures and layout: English, French and Spanish editions published in Paris, and a Russian edition published in Moscow. . In addition, a reduced Japanese version appears in Tokyo and a Danish version in Copenhagen. This year two new, full-fledged editions are scheduled to be launched: an Arabic edition for readers in the Middle East and other parts of the Arabic-speaking world; and a German edition for readers in Germany, Austria and German-speaking Switzerland. A notice will appear in due course announcing when the first number of these editions Will appear.

In its contents The Unesco Courier will continue to remain faithful to the goals it has set itself in the past: to/ serve as "A Window Open on the World" of education, science and culture through which every thinking man and Woman can look out on to the broad global horizons of international understanding for which Unesco is working. Each month it will continue to bring its readers authoritative information and food for thought presented in everyday language and in revealing pictures. Wholly non-political, its articles will portray, as in the past, the life and cultures of different lands, the art and literature, the science and education of other nations and describe the work of the United Nations, Unesco and the other U.N. Specialized Agencies.

At this great moment of advancing history and expanding horizons, the Editors feel that The Unesco Courier has its place in every home and in every school. 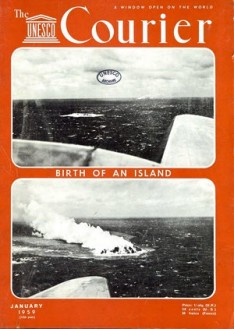