“The first instrument of a people’s genius is its language,” said the French writer Stendhal. Literacy, learning, social integration… Everything transits through language, which embodies national, cultural and sometimes religious identity for each person. It constitutes one of the fundamental dimensions of a human being. Yet specialists estimate that within only a few generations, more than half of the 7,000 languages spoken in the world face extinction, because they are not represented in government, education and the media. For this reason, the United Nations had declared 2008 the International Year of Languages, to be launched by UNESCO on 21 February, International Mother Language Day.

Produced with the support of UNESCO’s Intersectoral Group for Languages and Multilingualism, this year’s first issue of the Courier is devoted to languages. A crucial concern for the writers Boubacar Boris Diop and Jean Portante who “migrate” - happily but also painfully - from one language to another. Language is also a “visa” for immigrants who have to adapt to a new society for French-Serbian psycholinguist Ranka Bijelac-Babic. Her thoughts are completed by Afghan novelist Spôjmaï Zariab: “A brutal separation from one’s linguistic and cultural context evokes in my mind the image of a tree cut down one fine day to be planted in different earth.”

Safeguarding knowledge and know-how is also intrinsically linked to local and indigenous languages. Examples include the Machaj Juyai, “secret language” of the Kallawaya, Bolivian herbalists, whose story is told by Carmen Beatriz Loza, researcher at the Bolivian institute of traditional medicine in La Paz, or the language of the Ainu people in Japan, described in the process of dying out by Kaori Tahara, historian of Ainu origin. Some languages are disappearing while others are emerging. Often they are ancient but only now beginning to show up in public life, like the ones in the former Soviet Union, for instance. Our colleague Katia Markelova has decided to tell you about Kirghiz.

Finally, education is a crucial factor for safeguarding or developing a language: the Indian linguist Appasamy Murugaiyan examines the relationship between language and school, which is unusually complex in India, a country that is home to 1,650 languages and over a million educational institutions.

This year, the UNESCO Courier celebrates its 60th anniversary and offers its readers something new with “Focus”, announcing in this issue the International Year of Planet Earth (to be launched at UNESCO on 12 February) and “Landmarks” where you will find portraits of personalities who have had significant impact on the history of literature, science and art around the world. More big news, for the International Year of Languages: Portuguese is being added to the Courier’s six linguistic editions, and will soon be available online.

Last but not least, your magazine is becoming interactive! Starting with this issue, you can express your opinions and have them published on line. Share your thoughts! 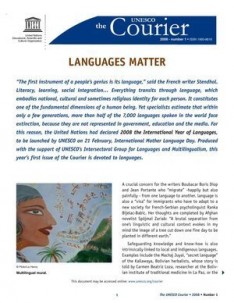