The Artistic genius of Latin America

To attempt a general presentation of the artistic profusion of Latin America in a single issue of our magazine is a challenge that we have accepted with all its attendant risks. It was, for example, imperative to select, in a field in which choosing is bound to be to some extent arbitrary. In making choices we have been guided by the subterranean unity which structures creativity in this region of the world.

At the outset we were helped in our task by the strong presence of the Amerindian peoples. The sense of the vertical, so overwhelming as one descends the twisting road leading to Chavin in Peru and contemplates the landscape rising upright before one's eyes; the propensity for altitude characteristic of the Mayas, the Aztecs and the Incas, which sets aside the fertile stratagems of perspective and gives itself to flatness and unbridled luxuriance of forms; the winding curves of geometrical figures and raw colours which are part of the legacy of pre-Columbian ceramics and carved stone temples: all these elements can be found in the constructivism of the countries of the Rio de la Plata, in Mexican mural art, in the work of such contemporary artists as Gamarra and Botero, and to an extreme degree in the kinetic structures of Soto or Cruz-Diez.

Engrafted onto this Amerindian root are certain influences which originated in the West and have had a decisive impact: the widespread representation of and familiarity with death; the exacerbated conventions of colonial Baroque, which are so outstandingly displayed in the architecture of Old Havana (read our online article) and whose masterpieces of plastic art seem to find a distant echo in the accumulation and density of the painting of Seguí, in the bold architecture of contemporary cities, especially Brasilia, and in the graphic inventions of modern art which Matta has taken so far. In all these fields Latin American artists soon ceased to submit to outside influences and became masters of creation, faithful to the genius of their peoples.

It is not surprising, then, that folk art, both crafts and painting, is so important in this part of the world. The art of the urban barrios and rural art, Amerindian art par excellence, it is often closely linked to the African influence. Nevertheless, the most striking examples of African influence are to be found in the "natural" painting of Haiti and Brazil, but also in the highly wrought works of a Lam or a Cárdenas.

The basic factor of Latin American art is the mixture of cultures and their dynamism, which is renewed as a result of this very intermingling.

Finally, we regret that lack of space has prevented us from setting our presentation of South American art as fully as we would have wished within the context of the daily life of the peoples to whom it belongs. Above all we regret that we have not been able to cite the many artists, young and still little known beyond the frontiers of their countries, who are today maintaining the continuity and almost boundless fecundity of Latin American art. 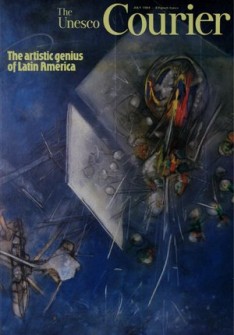