By one of those contradictions which the human mind readily accepts, peoples described as "primitives" or as "savages" are often hailed for their remarkable scientific knowledge. They are said to possess secret formulae which are far more effective than anything used by modern chemists or doctors. Those who despise primitive peoples yet speak with awe and admiration of their almost supernatural knowledge, often display an exaggerated naivety and credulity, but they are actually closer to the truth than others who deny that primitive peoples possess any science worth knowing about.

The Indians of South America may not have any "miracle drugs" but it was they who discovered the qualities of chinchona bark, of coca leaves and of the lianas from which they make curare. The conquest of the tropics by the white race would have been impossible without quinine ; the role of cocaine in modern surgery is known to all. As for curare, an extraordinary poison which acts on the nervous system, this is being put to ever greater uses in neurology.

These three discoveries are indicated merely as examples of our debt to the so-called primitive peoples, but the list could be greatly extended if we considered other fields and other parts of the world. It was also the "savages" of the Amazon who revealed to the world the wonderful qualities of rubber and who first made practical use of them. For long the methods used to transform latex from the Hevea tree into rubber Were those of the Indians. Let no one say that these were accidental discoveries and not the result of scientific enquiries. To extract curare from strychnos toxijera called for many long experiments and lor qualities inherent in the true scientist : a keen sense of observation, patience and the urge to experiment.

Is it necessary to remind those who, when speaking of the Indians or of the peoples of Oceania, refer to them as "savages" that these same men succeeded in mastering their environment and that they possess an empirical science in agriculture which agronomists are quick to praise and to draw inspiration from.

Biologists have not always admitted the debt they owe to "primitive" peoples who have made available to them observations of the greatest precision and accuracy. It is of course natural for a man who lives by fishing and hunting to know the habits of his quarry down to the last detail. Yet if in this respect "primitives" are valued aides for the scientist it is also true that their ideas on the development of living things are just as fantastic as those of the naturalists of antiquity and even those of the Renaissance. But their credulity and naivety are no greater than those shown by the ancient Roman naturalist, Pliny the Elder.

This issue of The Unesco Courier devoted in part to aspects of "science among primitive peoples" may in a small way serve to remind those concerned with the education of "primitives" that they are not dealing with backward or ignorant minds and that those to whom they are today bringing the rudiments of Western science are themselves capable of teaching lessons in many fields.

Let us remember too that the death of the "primitive" civilizations which so many people advocate in the name of progress, will also see the vanishing of much knowledge that is not without significance for our own civilization.

Read our online article Witch-doctors and psychoanalysis, by Claude Lévi-Strauss 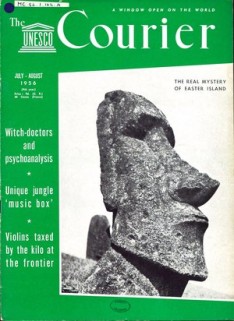