The quest for universality is a response to a long-standing human aspiration. It may have begun long ago with the sages, prophets and mystics who sought a single divine principle which would release the sacred from confinement within purely local, tribal or national boundaries and make it accessible to people everywhere. In so doing, they created a potential link between each individual conscience and humanity as a whole.

The philosophers of the Enlightenment gave another meaning to the quest when they removed its sacred dimension. They regarded the principle of universality as inherent in human nature and applicable to all people, whatever their religion or community, by virtue of their status as members of the species. This attitude, which seems unexceptionable today, was actually a radical new departure at that time.

How far has Europe served or notably through the slave trade and colonialism betrayed this vision of universality in the last few centuries? Now that all other societies have been confronted with it through European influence, how and at what cost can they incorporate it into their mental and cultural landscape?

These are some of the questions raised in this issue, which has been inspired by an international meeting that was organized by the European Parliament at Strasbourg on 21 and 22 November 1991 on the theme of "Universal culture and Europea dialogue of civilizations". The authors of the articles published on the following pages all took part in the meeting. In our choice of contributions we have tried to give an idea of the wide range of responses aroused by this important question. We only regret that for reasons of space we have been unable to publish texts by the other participants at the Strasbourg meeting, who all contributed to a debate of high intellectual calibre. 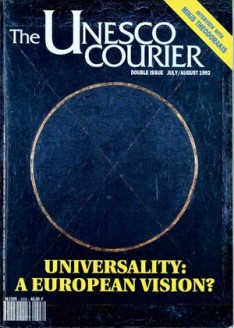