In August 1947 UNESCO began to publish a news bulletin about its activities. Its title was the Unesco Monitor, and it was the forerunner of the Unesco Courier, which began publication in February 1948.

That was half a century ago. Today, leafing through the fifty volumes of the Courier that stand on our shelves, we can retrace, page by page, a unique journey through the intellectual history of our time. This body of reading probably has no equivalent in the international press. How many magazines can claim to have opened their columns to so many notable figures from so many of the world's cultures, gradually building up over the years a kind of encylopaedia of the age's intellectual life and its achievements in the sciences and the arts?

All those who have lent a hand are justly proud of their association with this long and painstaking enterprise. One thing that none of them can forget is that the Courier's Odyssey is first and foremost UNESCO's. If the Courier has been able to capture and harness the fair winds of intelligence, it is because they have blown into UNESCO's sails.

What is UNESCO's ultimate purpose? Torn between dreams of utopia and the obligations of an intergovernmental organization, reconciling the day-to-day demands of hundreds of field projects worldwide with the principles laid down for it by its founders, does it exist to serve a thousand different goals or a single one? In this issue we have asked Alteau, a talented young cartoonist, and Doxuan, story-teller and humorist, to answer this question in a form that we hope you will find both visually and intellectually entertaining.

A year ago we gave twenty young cartoonists carte blanche to draw the image of Unesco as they saw it. In the present issue we invite readers on a journey of investigation that will take them to the heart of UNESCO and reveal the coherence of the ideals that are its lifeblood. 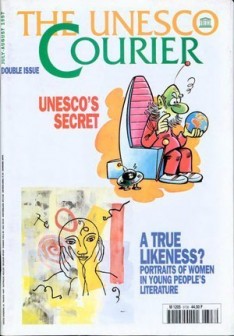