"Humanity is under no compulsion to abdicate"; Jaime Torres Bodet, to the 5th session of the Unesco General Conference

There are not many places in the world where one realizes so clearly as on the banks of the Arno that wisdom and beauty are the twin arches of that invisible bridge which leads from the individual conscience - ever rebellious against its destiny - to man's collective conscience, ever in search of general progress. This city's greatest citizen was an exile. His divine comedy confirms it for us : for free men the longing for the lost fatherland is but the aspiration to another fatherland that may always be won-humanity itsell.

Every statue, every picture, that we stop and wonder at here, every Florentine stone we look at, would give us the lie were we so arrogant as to conceive our mission as a substitute for the original creative mission of educators, artists, poets, and scholars. Happily, we think no such thing. Our Organization does not so mistake its role. We know that to seek to impose uniformity on the infinitely diverse and spontaneous life of culture would be illusory. If Unesco should attempt to sap the originality and individuality of the different national cultures, it would be unfaithful to its very origin, born as our Organization was of a free covenant in which the representatives of the Governments strove to speak on behalf of the peoples. The reason for our existence is not to create what none can create by order, by rules and laws. The clear intent is rather to serve the creative minds among mankind by putting them in more direct relation with the problems of the masses, and at the same time to serve those masses, who, in the longing of their unsatisfied needs, aspire towards education, and through it towards freedom...

Thus, in clearly recognizing our limitations, we become the better aware of our ambitions. There is no Unesco science, no Unesco art, no Unesco philosophy. But there are many dark places among men; to light up these places requires a joint effort on the part of all the different countries : a faith which no individual State can furnish, a truth of which no State is the sole repository, a wisdom and knowledge which no one single State possesses. 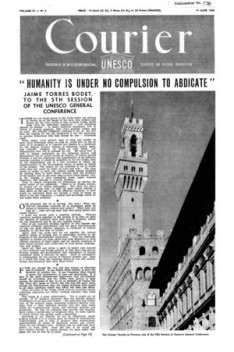