Are our children learning history with a slant?

Arnold Toynhkk, writing recently in the quarterly review Diogenes had some revealing things to say about the new approach to the study of history. "In less than one lifetime", he remarks, the face of the World lias changed almost out of recognition, and the West's position in the World has undergone the greatest change of all. If one has been following the course of world affairs since 1914, one is bound to have gained, from this alone, a good deal of new knowledge about history; and meanwhile, the forty years that have seen this new chapter of history writing itself have also seen the orientalists and the archaeologists recovering for us other chapters of history that had been cither forgotten completely or had been remembered only in a few shreds and tatters of tradition.

Toynbee points to the fact that in our day the Minoan Civilization has risen from its grave below the Graeco-Roman Civilization; the Shang Culture in China from below the classical Chinese Civilization; the Indus Culture from below Aryan India; the Hittite Civilization from below the Asia Minor known to Herodotus; and at the same time our picture of the Sumerian and Egyptian Civilizations, and of the pr-Columbian Civilizations in the New World, has been quite transformed by the new knowledge that the excavator's spade has brought to light here too. This re-discovery of the rather less recent past, together with the portentous events of our own day, has given us a wealth of new historical information. Our vision of the history of Mankind, since the rise of the earliest known civilizations about 5,000 years ago, has been enormously enlarged and has also been brought into much sharper focus. And since curiosity is one of the characteristics of human nature, we find ourselves moved, in our time, to take a new look at the new face of history as a whole.

And Toynbee adds : "As soon as one looks at the new panorama of history, one sees that it bursts the bounds of the current framework within which our Western historians have been doing their work for the last 250 years... As I write these words, I seem to catch the faint sound of the busy archaeologist's trowel, as he deftly uncovers new layers of buried civilizations in Bucklersbury and Beycc Sultan and Palenque.

The very word "history", it is interesting to note, comes from the Greek meaning "inquiry" or "investigation". All presentation of history is based on a series of investigations and the asking of questions, as varied and never-ending as the historian's field of inquiry has broadened. In this issue, The Unesco Courier examines a few of the questions historians and teachers have been asking recently about the picture of other countries and cultures which our children seem to be getting from many history books. 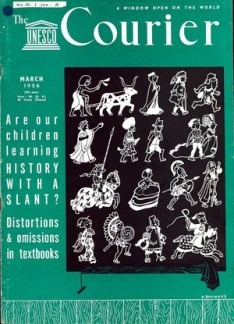