To many people, the four years since December 10, 1948, when the Universal Declaration of Human Rights was adopted and proclaimed by the General Assembly of the United Nations, seem too short a period to judge its full significance. Yet, even the opening words of the Declaration, recognizing "the inherent dignity and equal and inalienable rights of all  members of the human family" leave no doubt as to its capital importance.

Those who today enjoy the fundamental rights of equality and freedom tend to regard this principle as a perfectly natural thing. They are apt to forget both the recent lessons of history and the examples of past centuries, during which men fought to win recognition of this principle, and resisted the tyranny and oppression responsible for individual and collective crimes against humanity.

The modern conception of Human Rights is the fruit of a long evolution in human customs, outlook and law which finally broke down outmoded doctrines of absolutism and feudalism. Yet the idea itself is by no means new. If we look back over the centuries, we find it set forth in the texts of constitutions, expouaded in the speeches of politicians, expressed in the wisdom of Hindu and Chinese philosophy, and recorded in the writings of religious leaders.

One of the greatest of ancient historians, Thucydides, has recorded for posterity the famous oration of Pericles, in which the atter expounded the conception of Human Rights in the Athenian democracy: "Its administration favours the many, instead of the few; that is why it is called a democracy. The laws afford equal justice to all in their private differences. Advancement falls to reputation for capacity, class considerations not being allowed to interfere with merit. Poverty does not bar the way; if a man is able to serve the tate, he is not hindered by the obscurity of his condition."

In particular, Thucydides quotes an admirable maxim :"Freedom is identical witch happiness, courage identical'with freedom". Such Human Rights principles are expressed in Roman philosophy which, despite the acceptance of slavery, can record Seneca's Homo res sacra homini (Man is sacred to man). They are also to be found in the spiritual theories of Buddhism, the political wisdom of the disciples of Confucius, the Islamic precept pf human brotherhood, the ethics of Judaism, the equalitarianism of Christianity, quotations from the writer of the Reformation and the 17th century, and in the clarion call of the 18th century, with its humanitarian philosophy and optimism which engendered a po'werful upsurge of international progress and freedom.

Human Rights have been included in the charters and constitutions which, in the various countries where they were promulgated, won for men some of the rights that are now proclaimed in the Universal Declaration of 1948. Among the oldest of these documents is the Magna Carta of 1215, but the ones which exerted the most widespread influence were the French Declaration of the Rights of Man and Citizen, promulgated in 1789, and America's Declaration of Independance and Bills of Rights, which preceded it by several years.

In the four years which have passed since the adoption of the 1948 Declaration, men have still fought one another, and all mankind has lived in the shadow of war, and the fear of very real threats to freedom. Yet, while admitting a decline of Human Rights, there is certainly no reason for despair and apathy.

On the contrary, the moment to proclaim fundamental freedoms with renewed vigour is when they are most gravely threatened. It is because these freedoms are denied to millions of human beings that they must be defended and extended.

The greatest enemy of Human Rights is man himself. Those who live under a tyranny can do no more than give vent to their despair, while those who enjoy these rights are perhaps over-inclined to take them for granted-like someone who recently declared: "Human Rights are so much a part and parcel of our lives that we find it difficult to imagine that they could not exist !"

Yet it is not because all men are not yet ready to offer each other the hand of friendship that no hands should be outstretched. "In the midst of all our miseries and all the injustices committed or suffered, we must have faith in human nature," Jean Jaures wrote in his Address to Youth. "He who has lost the sense of grandeur and infinite potentialities of mankind is self-condemned never to understand his fellow men.

"Such faith is neither stupid nor superficial. It is fully a'ware of all the vices, crimes, errors, prejudices and egoisms-the egoism of individuals, the egoism of castes, the egoism of parties and the egoism of classes, which hamper progress and frequently turn the river of life into a muddy, troubled torrent. And it is aware that the forces of good, of wisdom and light and justice need the help of time, and that the night of slavery and ignorance cannot be dispersed by a sudden flash of light, but only by a long series of flickering dawns."

Unesco is working to end this"night of slavery and ignorance."Its programme constitutes in itself a roll-call of the fundamental rights of man, and its work is aimed at their realization. Unesco's programme of fundamental education aims to help the people of underdeveloped countries to raise their standards of living and to solve their economic and social problems. It is also working to bring about the universal application of free and compulsory primary education. It is fostering the access of women to education, the freedom of artists, the free flow of cultural material.

In fact, every aspect of Unesco's programme is linked with one or other of the rights proclaimed in the Universal Declaration. It is Unesco's effort in favour of Human Rights, in close co-operation with the other Specialized Agencies of the United Nations, that forms the theme of this issue of the Courier.

Discover other issues on Human Rights 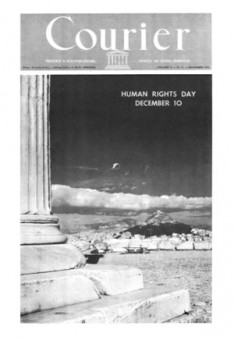