Almost forty-five years ago, the French explorer Jacques-Yves Cousteau and the engineer Emile Gagnan invented the aqualung (Scuba), a self-contained underwater breathing device, and opened up a new era in the exploration of the ocean floor. Before the aqualung, divers were weighed down by heavy, cumbersome equipment which severely limited their underwater stamina and work capacity. With the aqualung vast areas of the sea floor became accessible to human curiosity to marine biologists, to photographers, and to archaeologists.

Since that time underwater archaeology has made great strides. A number of spectacular discoveries, excavations and rescue operations (a selection ofwhich are described in this issue) have captured the imagination of a wide public. Meanwhile, away from the limelight, great progress has been made in the development of underwater archaeology as a discipline on a par with land archaeology. This is a science which brings together not only professional and amateur archaeologists but sports divers, geologists, architects, surveyors and marine historians, as well as the geophysicists and electronic engineers who help to search the seabed and pinpoint remains through the use ofremote sensing equipment. Underwater archaeologists are today adding to our knowledge of the past in many ways. Ancient wrecks are "time-capsules" which, when scientifically studied, can provide a microcosmic picture of life in the civilizations which produced them. On a larger scale, the collection, collation and interpretation of a growing mass of data accumulated from individual wrecks and underwater sites which are often not spectacular in themselves are throwing new light on ancient technologies and patterns of trade, changing sea levels, ancient settlements and migrations, helping us, in short, to understand human use of the sea and lakes over several millennia.

This issue presents a selection of reports on the activities of underwater archaeologists working in different world regions, in different marine environments, on different types of site, using different methods, on projects of different scales. The reports cover not only investigations of marine shipwrecks, but of submerged inland sites, as well as harbours, cities and even a vast landmass, now located underwater as a result of various kinds ofnatural occurrences. Finally, two articles reflect UNESCO's concern about the protection of archaeological sites and the need for action to combat the looting of underwater sites and the growing illegal traffic in archaeological treasures. 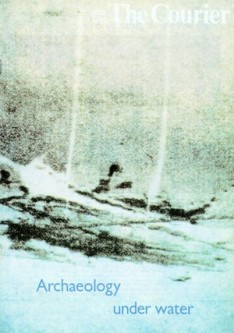