Comenius, apostle of modern education and of world understanding

When last November the Czechoslovak delegation to the ninth session of Unesco's General Conference held in the capital of India proposed that this Organization be associated "with the celebration of the three hundredth anniversary of the publication of John Amos Comenius' Didáctica Opera Omnia, by publishing a volume of his selected "works, the resolution was voted unanimously not only by the programme commission but by the plenary session of the conference. Such unanimity, rarely achieved in intergovernmental assemblies, is more eloquent than any commentary.

It testifies to the common will of 79 member states of Unesco to celebrate, at the same time as the Czech nation is doing so, a memorable date on which there appeared, among his other works, The Great Didactic, today recognized as the first complete presentation of a science of education and the inception of modern theories of teaching.

These ideas, spread across a receptive Europe three hundred years ago by the great precursor, have lost nothing of their force or their efficacy. But though they are commonly accepted in our time they are far from being an established fact. A gigantic effort still remains to be made, by all peoples uniting their resources, so that they are ultimately applied by all institutions and for all mankind the world over.

It is because his message is still so timely that Unesco, in response to the wish expressed by the Czechoslovak nation, is attempting to make Comenius better known and appreciated. Unesco's contribution on this occasion is designed as an homage of respect and gratitude towards a man whom it recognizes as its spiritual ancestor. 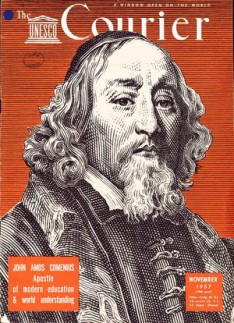