"Let's take science fiction out of the classroom and put it back into the gutter where it belongs".

These words, which participants at the founding meeting of the Science Fiction Research Association, were astonished to find scrawled up one day on a blackboard in their conference room, were a sardonic comment on the long struggle of modern science fiction to emerge from the ghetto of the luridly illustrated pulp magazines of the 1920s to the 1940s to achievement of the status of serious literature.

We owe an incalculable debt to the men who founded and wrote for these magazines, which the intellectual élite of the day dismissed scornfully as no more than a new emanation of the "gutter press".

Against all the odds, they persisted in what, ironically, can now be seen as the educational mission of preparing the man in the street for the incredible scientific progress of the twentieth century.

Whether we like it or not, we live in a century in which scientific advance has become the dominant influence on our lives and on the social fabric of our society. In the words of Horace L. Gold, founding editor of Galaxy Science Fiction, "Few things reveal so sharply as science fiction the wishes, hopes, fears, inner stresses and tensions of an era, or determine its limitations with such exactness".

As some of our contributors point out, the origins of science fiction can be traced back to Antiquity. It is a genre which covers a wide field embracing fantasy (including monsters and aliens from space), "space operas" (the classic Western film transposed to space), time travel, the colonization of space, catastrophes and a variety of Utopias, as well as speculative prediction and extrapolation from hard scientific fact. It is with the two latter aspects that we are chiefly concerned in this issue of the Unesco Courier, although we could not resist including Kang You wei's late nineteenthcentury vision of a Utopian "Age of One World", or Isaac Asimov's fascinating description of how he writes his bestselling works of science fiction.

Like science itself, science fiction is the fruit of the imagination. Iftoday the reality of science may seem even more incredible than the most fantastic inventions of science fiction, the two will continue to enrich and cross-fertilize each other.

In today's world, science has made its presence felt in every aspect of life, in art, in education and in social organization. Science fiction's great achievement is to have educated us to accept this powerful new influence, to have warned us of its potential dangers and to have laid before us all the immense possibilities it has to offer. Above all, science fiction lays the bogey of science as an uncontrollable Frankenstein by its constant reminder that the whole edifice of science is built on the foundation of man's soaring, limitless powers of imagination.

Read the issue.Download the PDF. 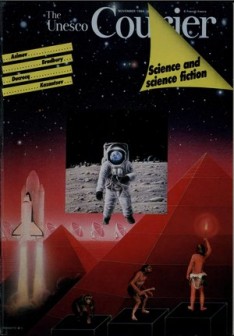