A hundred years after bis death, the time seems ripe to attempt to fathom the depths of Hugo "the manocean", to examine bis work with a more dispassionate eye and to bring to light the essential unity of the immense universe of a poet who once described himself, with more than a touch of self-mocking humour, as "the Gargantua of things beautiful".

Although Victor Hugo remains, at least in France, part of the collective memory, he is increasingly remembered in a fragmentary, fóreshortened way. The extraordinary activity and interest aroused by the celebration of his centenary is evidence that he has lost none of bis force and vitality. Yet, paradoxically, he remains both a poorly-known and a con­troversial figure.

The very size of bis work, whose restless tentacles reach out in every direction, mask from our view both its central core and its overall scope. Each of us sees him in terms of one or other of the stereotyped, almost legendary images of him that, not without soine prompting by the poet himself, have successively been projected-the bourgeois poet, the libertarian humanist popularized by the Third Republic, the grandiloquent sage, the bearded, faun-like grandfather.

Today such simplistic selectivity is no longer possible. With each passing year a clearer outline of the vast Hugolian continent gradúally emerges and wé begin to perce'ive the unifying purpose that presided over its creation; "Poetry", wrote Hugo, ''is Virtue", the all-encompassing truth, and it is this sense of a coherent, irreducible totality that provides the vital key.

We salute the man who was both a part of the history of bis century and of the future, who denounced the death penalty and fought for the rights of man and for the oppressed. Now, too, we appreciate the full scope of his graphic art and recognize the artist in the writer and the writer in the artist.

It yet remains for us discover Hugo the poet. Looking beyond ideological and aesthetic prejudices and reserva­tions, we have to seek out the inspired virtuoso of the word, one of the greatest because one of those to whom we feel most close. He it was who knew how to conjure up "the voice of the shadows", the medium who liberated the subcon­scious of language; and to this extent he is "modern". But in bis dazzling use of everyday language he is also that "force qui va'', that driving force, that questioning, ever-hopeful breath of life that spans the centuries. 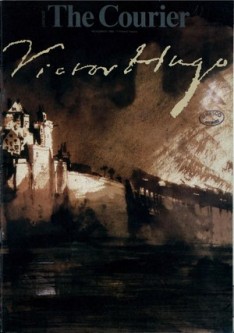