The fresco of mental images peoples create of themselves and the world they live in the main theme of this issue of the Unesco Courier owes much to the lessons they have learned from their history. Sometimes this "popular imagination" focuses on a great man or woman. Two such outstanding figures are commemorated in the following pages: the great Islamic scholar and man of faith al-Ghazäli; and Aleksandr Ostrovsky, the contemporary of Tolstoy and Turgeriev who was one of the founders of the Russian theatre, which has made such a notable contribution to our understanding of the human soul.

The collective imagination is also a product of the interaction between different ways of perceiving and describing the world. In this process, a "transfer of images" takes place in which a community assimilates, sharpens or deforms its conception of other peoples and civilizations. One illustration of this phenomenon, described in this issue by Miguel Rojas Mix, is the way in which depictions of the American continent by European artists over the centuries have sometimes but not always been distorted by projections of European concepts and values. Likewise, a comparison between the cult of filial piety in China and certain religious practices in the West casts a revealing light on differences and similarities between two civilizations.

Imagination is inevitably rooted in the world of practical knowledge. An instrument such as the Japanese abacus can be used with amazing technical virtuosity as a calculating instrument; it also opens up far wider horizons of mental activity which stretch beyond the processes of arithmetic. Recent developments in brain research are showing a similar form of interdependence, as they stress the importance of "co-operation" between the rational and the intuitive functions of the brain's two hemispheres. In the same strain, it is now being realized that science and tradition are not mutually exclusive, and that the most advanced discoveries of science can be enriched by the deepest roots of tradition.

Finally, the imagination of peoples also shapes their future, tracing a design for development which they alone are equipped to define. Peoples can only advance towards self-fulfilment when they draw on the vitality of their imagination and the dynamism of their culture. 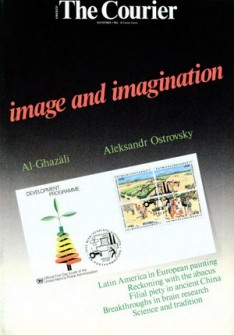