The fate of Abu Simbel ls now In the balance. Unesco has addressed a "now or never" appeal to Its 100 member nations for voluntary contributions to save the two colossal temples of Abu Simbel from destruction under 200 feet of water as a result of the construction of the High Dam at Aswan. The temples, hewn out of the solid mountain rock in the 13th century B.C., are considered to be among the great architectural glories of Pharaonic art.

Before the end of October of this year, Unesco's Executive Board will be in a position to know whether these testimonials of a former civilization are to be considered Irreparably lost to mankind, or whether a joint international effort will save them from disaster.

The appeal is contained in a special message on the present state of the Nubian International Campaign to save the treasures of Nubia, addressed on August 4 by the Acting Director-General of Unesco, Mr. René Maheu, to all of Unesco's member states. It calls for voluntary contributions totalling $67,000,000 to save not only Abu Simbel but other temples and monuments in Egypt and the Sudan which are threatened by the future Aswan Dam when in a few years' time it backs up the waters of the Nile in a 300-mile long artificial lake. Unesco has asked all countries to guarantee a contribution, extending over the next seven to nine years, in the same proportion as their present assessment for the Unesco budget.

The two temples of Abu Simbel are to be preserved by what has been described as "the most daring engineering project of modern times." They will be sliced from the mountainside into which they were built three thousand years ago, encased in concrete boxes, and raised by giant jacks over two hundred feet.

The call to Unesco's 100 member States was made on the recommendation of the International Action Committee which is advising and helping the Director-General of Unesco in fund-raising. The Action Committee, made up of representatives from all continents, met in Paris last June to examine the present state of the campaign. They found that the rescue operations except the Abu Simbel project are now almost assured, and stressed the urgency of obtaining the funds needed If the two temples are to be saved in time.

The overall contract for Abu Simbel must be signed by January 1, 1962. Before then, preparatory work must get under way, and the main work must begin not later than May 1962.

Before the end of October 1961, enough money must therefore be guaranteed from international sources over the next seven to nine years to enable Unesco's Executive Board to give the United Arab Republic the go-ahead signal. It is estimated that $20,000,000 will be needed for the preparatory operations and the first payments to the contractors in 1962, and a further $13,000,000 in 1963.

President Gamal Abdel Nasser in a statement made on June 20 of this year described Abu Simbel as the "most important relic of civilization in Nubia... this undertaking represents the most serious phase In the salvaging of the monuments of Nubia, a phase that calls for collective effort."

The cost of the entire Nubian rescue operations (exclusive of archaeological and prehistorlcal excavations) has been estimated at $87,000,000. This will provide for the dismantling and transfer of 23 temples, tombs, early Christian churches and rock-hewn chapels in the U.A.R. and the Sudan (estimated cost $10 million); the preservation of the temple-group on the isle of Philae ($6 million) ; and the preservation of the temples of Abu Simbel ($70 million).

Four miles south of the present Aswan Dam in central Egypt, the new High Dam (Sadd el Aali) is being built across the Nile by the United Arab Republic with Soviet aid. It will contain the river above that point and form a gigantic artificial lake drowning the Nile valley of Nubia in both Egypt and the Sudan.

For Egypt the new lake will mean the beginning of an era of great regeneration. It will increase the total food production of the country by nearly one half; some 2,500,000 acres of desert will be brought under cultivation, and an additional 750,000 acres now flooded will be reclaimed. Egypt's hydroelectric output will be increased by the dam something like ten times.

The new dam is an economic necessity for Egypt. But there remains the fact that everything within the Nubian lake area will be obliterated by 1968. In 1959, the Governments of the U.A.R. and the Sudan turned to Unesco for help to save the temples and monuments menaced by the impending flood in both countries. On March 8, 1960, Unesco's Director-General, Mr. Vittorino Veronese, launched the now famous International Campaign to save the treasures of Nubia.

The response thus far has been both generous and heartening. As the President of the United States recently said, it is "an international effort which has captured the imagination and sympathy of people throughout the world."

Support has come from governments, from private and public organizations and from private citizens in every part of the world. Even children from different countries have organized collections to help. The world's press, radio, television and cinema have all joined voluntarily to help make the campaign a success. In some 20 countries national committees have been formed, made up of noted archaeologists and other leaders in the fields of science and the arts, as well as important officials, businessmen and members of civic groups.

Announcing the United Arab Republic's contribution, President Nasser declared last March: "The world's conscience has now awakened to a deep awareness of the importance of safeguarding the monuments of Nubia in response to the international appeal launched by Unesco on March 8, 1960. Through thts appeal Unesco has sought to arouse the energies and goodwill of all peoples in a cause deeply rooted in the ancient history of civilization and symbolic of the hopes of mankind.

"We pin our hopes on the High Dam for the Implementation of our plans of economic development; but likewise we pin our hopes on the preservation of the Nubian treasures in order to keep alive monuments which are not only dear to our hearts we being their guardian but dear to the whole world which believes that the ancient and the new components of human culture should blend in one harmonious whole.

lend in one harmonious whole. "The preservation of the legacy of mankind is no less important than the construction of dams, the erection of factories and the greater prosperity of the people...

"Unesco has contributed much to the creation of this sense of solidarity and to the action undertaken to safeguard the monuments through the facilities and funds it has made available and through the co-operative spirit which has guided the specialists and the groups of scientists who have taken an interest in this unique endeavour.

Reflecting similar sentiments, the President of the Sudan, Ibrahim Abboud, recently reaffirmed his country's responsibility to the rest of the world for the ancient monuments within his borders, "... since the history of the Sudan ls but a part of the history of mankind."

The enormous tasks of the campaign were divided into three categories. First there was the urgent job of carrying out systematic surveys and the organization of expeditions to excavate archselogical and prehistoric sites the threatened area of both Egypt and the Sudan.

As André Malraux has said, "Nubia, like Chaldea, belongs to the dawn of our own history." It was the junction point at which the cultures of inner Africa met with the cultures of the Mediterranean world. In the region to be flooded, scientists feel, may well lie some of the important clues to the riddle of man's unknown past. Today, Nubia has become a vast archaeological camp, with almost 30 expeditions at work or about to work.

The second category comprises the dismantling and the removal of ancient temples and other historic monuments to safety beyond the flood area. These operations are now under way and are progressing satisfactorily. The U.A.R. has already removed the three temples of Kertassi, Debod and Taffeh, while the Federal Republic of Germany has offered to assume the task of removing the great temple of Kalabsha, and France the temple of Amada.

The last category includes the two most important projects of the campaignthe preservation in situ of the temples on the isle of Philae, and the Abu Simbel temples.

If the United States Congress approves the $6,000,000 appropriation for Philae recommended by President Kennedy, the future of Philae will be definitely assured. In his message to Congress, Mr. Kennedy stated: "I consider it to be in the interests of the United States to assist in rescuing these historic remains of a former civilization from destructionand to join the international effort to conduct exploration and research in the threatened area of Nubia before it is submerged. The United States, one of the newest civilizations, has long had a deep regard for the study of past cultures, and a concern for the preservation of man's great achievements of art and thought... I recommend that we now join with other nations through Unesco in preventing what would otherwise be an irreparable loss to science and the cultural history of mankind."

Thus the Unesco campaign has almost reached its goal – except for the two temples of Abu Simbel. The "now or never" battle to save Abu Simbel will be decided in the next few weeks. 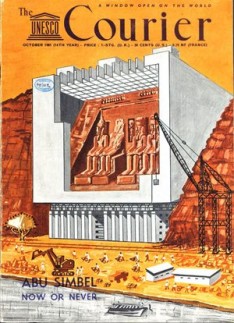