Man and the biosphere: a partnership for sustainable development

One of the highlights of 1987 has been the publication of Our Common Future, the report of the independent World Commission on Environment and Development, commissioned by the United Nations. "The environment," says the report, "is where we all live; and development is what we all do in attempting to improve our lot within that abode. The two are inseparable."

The report goes on to say that "the changes in human attitudes that we call for depend on a vast campaign of education, debate and public participation. This campaign must start now if sustainable human progress is to be achieved."

In this issue of The UNESCO Courier we hope to further that campaign by publishing extracts from a forthcoming report on UNESCO's Man and the Biosphere (MAB) Programme, entitled Man Belongs to the Earth, in which a serious attempt has been made to marry strict scientific accuracy with a style accessible to the general reader.

The extracts published here do not by any means cover the entire range of MAB activities. In particular, forests are deliberately not mentioned since we shall be devoting a future issue of The UNESCO Courier to this subject. The extracts do, however, underline the message of the World Commission on Environment and Development that development and conservation of the environment, far from being incompatible, are inextricably linked. 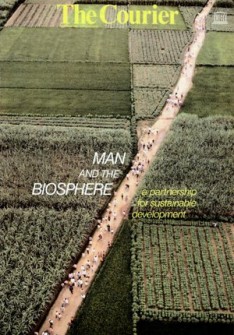