The cultural hegemony of television, this reign of the image that extends over the entire planet, is disturbing because it is largely incomprehensible. Television's empire obeys laws that have not yet been fully grasped, and brings into play emotional mechanisms that nobody entirely masters. Rarely has any creation become so independent of its creator. Televsion is an explosive, hazardous instrument, an ambivalent and proliferating spirit peddling a symbolism whose meaning is uncertain. It is both all-powerful and much less mature than people imagine. The empire of television extends around the planet; but it is an empire ruled by a child.

There is something mysterious about what appears on the television screen and the "message" it sends across the world. No-one can predict precisely what signal will be transmitted to the viewer neither the journalist, the technician, the politician sitting under the studio lights, nor the producer. The reason for this unpredictability is that the message vehicled by television does not consist exclusively of words, or reflection, or pictures, or a duplication of the real world, but of a complex mixture of all of these things so complex, in fact, that no-one can totally control it.

A tiny gesture caught by the camera can rob an argument of its content. The unexpected impact of a single image can erase the meaning from a thousand words of commentary. The accidental drama of a live report lasting a few seconds can ignite flames of emotion in millions of homes. A moment of silence can say more than a speech. What the pitiless eye of the camera looks for is authenticity, a mysterious capacity to move or to convince, the elusive heart of the matter. This random, unpredictable quality of television is grounds for humility. Perhaps this is why it receives so little attention.

People usually tend to criticize the manipulative power of the image. The subversive genius of television, which now crosses frontiers with the aid of dish antennae, eluding all kinds of censorship, played no small part in the collapse of communism. The telefrenzy that accompanied the Gulf War further demonstrated that even in democracies public opinion could be paralyzed by a (calculated) surfeit of images.

This manipulative power explains why television is politically so important in every nation of the world. A survey has shown that in 102 countries television is directly controlled by the state. Even in the most democratic countries, the political authorities have never entirely relinquished influence over the small screen, and the "televisual landscape" is the subject of constant, though often misguided, debate.

That is not all. Television has radically affected the functioning of democracy itself. It undermines the influence of intermediary bodies and representative institutions such as parliaments. It replaces, at least partly, the elective principle with the ephemeral and uncertain reign of the public opinion poll. It highlights declarations of political intent rather than political action, and encourages politicians to stage "media coups". By turning its spotlight on criminal investigation procedures, it unsettles the judicial system. The list is endless.

In all of these cases the result is the same. Representative democracy has been transformed by television. It has moved away from the principles on which it was once based and the precise mechanisms invented by its theorists, from Rousseau to de Tocqueville, from Montesquieu to Adam Smith. A new, ambiguous and only imperfectly conceptualized political model is now at work, literally before our eyes. The model is that of "media democracy", and neither constitutions nor laws have been adapted to it. Hence the widespread anxiety about television, a malaise that seems likely to be with us for some time.

It is not hard to see what is at stake. Confronted by this mysterious box that so suddenly appeared a few decades ago, we are all learning our way on both sides of the screen. On one side techniques of manipulation are being developed and refined. On the other the viewing public is gradually learning to detect lies, to decipher the sometimes false evidence of the image and to resist the television barrage that it has for the most part passively accepted until now. A race is on between the two, and what hangs in the balance is democracy.

By a strange paradox, television, which is both futuristic and archaic, takes us back into a world of magic. We must find the right way out. 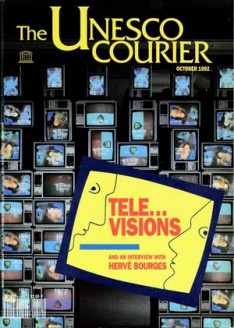