Slavery: a crime without punishment

Two hundred years ago revolutionary France abolished slavery, but then a few years later, as if frightened by its own audacity, re-established it. This brief spark of humanity would have to be re-ignited many times in Europe and the Americas during the nineteenth century, and revolts, bloody repression and civil wars (including the War of Secession in the United States) would have to be endured before slavery was at last proscribed on a worldwide basis. But this first victory for freedom was far from complete. There arose other forms of contempt for human beings and other forms of exploitation of forced labour: the colonization of most non-European societies, fascist and Nazi repression, and Eastern Europe's descent into totalitarianism.

It took another century marked by revolutions, military expeditions and two world wars before the colonial system finally ended, institutionalized racism was defeated and the socialist gulag was dissolved.

Does this mean that today at long last respect for human dignity prevails everywhere? Unfortunately, new inequalities are arising as a result of physical constraints and threats, because of terror imposed by individuals or groups, and the exploitation by some of the weakness of others. These inequalities exist where States are unable to prevent them and where medieval customs survive; where the law can be ignored with impunity, and isolation and secrecy permit terrible abuses.

What is this dark side of man that has always led him to despise, subjugate and debase his fellows? Why is it that for thousands of years inidividuals and in some cases entire peoples have been bought, sold and treated like beasts? And how is it that such a crime against humanity has remained unpunished even since the inception of Human Rights?

There is probably no simple answer to these terrible questions. We know, however, that we must never cease asking them. 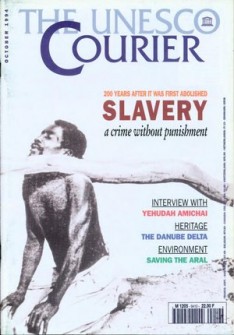