Where does fatality end and human willpower step in? Myths, religions and philosophies have long sought to pierce the mystery of this shadowy line of demarcation which runs like Ariadne's thread through the labyrinth of human experience. Perhaps the most striking expression of this mystery is the confrontation between humankind and the natural elements. How otherwise can we explain why some people go on living at the foot of a volcano or in an earthquake-prone area, though they are fully aware that in so doing they risk their lives?

Until a few decades ago humankind seemed to be particularly helpless in the face of earthquakes, cyclones and volcanic eruptions. It was impossible to predict when they would happen and what their effects would be. Human intellect and determination could only bow to divine caprice.

But worse was to come. It became apparent that in some cases human activity could actually trigger disasters or aggravate their impact. It was discovered, for instance, that unwise and anarchic land use caused drought, and that deforestation could be linked to flooding. Then came new disasters that were not of natural origin but were no less dramatic, such as the radioactive cloud that blew from Chernobyl, the green¬ house effect and the hole in the ozone layer.

All the same, there is no need for "catastrophism". What is in question is not progress but the ambivalence of its potential effects, the dark side that is inherent in any new invention. But let us not forget the bright side. Progress has made it possible for us to take effective action to mitigate and sometimes even prevent the worst consequences of some natural disasters, as well as those caused by human activity.

We are no more capable of preventing earthquakes today than we were in the past. But we can map high-risk areas and assess the probabilities of future occurrence by taking parameters from the past into account. We know what building techniques and materials to use in high-risk areas, what precautions to take when certain warning signs appear and what to do in the immediate aftermath of disaster.

Experience has taught us to take three key steps: to assess the risks from natural hazards as far as possible so as to mitigate their most devastating effects, and to educate people about potential dangers and ways of coping with them. We must also train the most active members of the population and perhaps most important of all make decision-makers aware of their responsibilities. If we want to get the most out of existing knowledge and skills, the whole of the population must be mobilized. 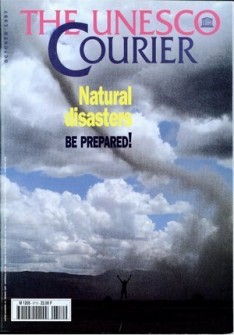