The Acropolis in peril

During a ceremony held in the Parthenon, Athens, on 10 January 1977, Mr. Amadou-Mahtar M'Bow, Director-General of Unesco, launched an international campaign to save the historic monuments of the Acropolis.

Many of Unesco's Member States have already set an example of international solidarity in responding to this appeal. Equally numerous are those which intend to offer the Greek governmentwhich has decided to assume the costs of the operationscientific and technical cooperation, especially in combatting the stone disease that afflicts the marble monuments and in ensuring the stability of the rock on which they stand.

This issue of the Unesco Courier is devoted to a study of the Acropolis from ancient times to the present day. 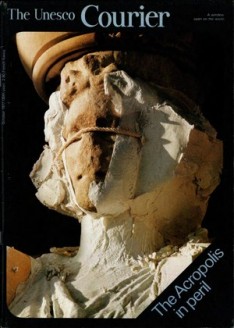