Misunderstood and maligned, the victims of prejudice and even of persecution, Gypsies form one of the minorities whose image has been the most grossly distorted throughout their long and troubled history.

Subject to pressures from other cultures which threaten both their cohesion and their traditional way of life, the Gypsy community throughout the world is today facing new social and cultural problems. It is therefore more than ever vital to make known the true nature of the Gypsy identity, of the Gypsy past and present, so that greater understanding and closer co-operation can be established between Gypsies and the rest of the world.

The Gypsies have established their own associations worldwide through which they have made their voice heard by governments and international organizations. In 1979, the United Nations Organization, already long aware of the problems of this as of other minorities, accorded the Romani Union consultative status. In addition, the Association des Etudes Tsiganes (Association for Gypsy Studies), a nongovernmental organization associated with Unesco, publishes Etudes Tsiganes (Gypsy Studies), a quarterly magazine that gives international coverage to matters of interest to the Gypsy community and to the problems that it faces.

This issue of the Unesco Courier aims to help achieve a wider international recognition and understanding of the Gypsy personality. The articles are written by authors who are themselves Gypsies or who have studied them and shared their life.

Most Gypsies refer to themselves as Rom, and this is the designation adopted by the United Nations. However, they are known by a variety of names in different parts of the world: in the English-speaking world they are called Gypsies or Romanies; in French-speaking countries, Tsiganes; in Spanish-speaking countries Gitanos; and so on. For the sake of clarity we have adopted these more familiar appellations in speaking of this varied but united people. 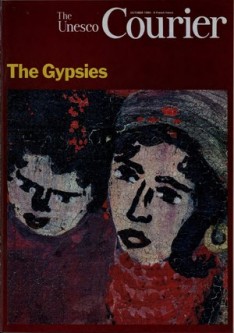