Small countries; a wealth of cultures

The end of the Second World War sounded the knell for colonial empires and opened the way to decolonization, a new chapter in the history of international relations. In the next forty years, around a hundred countries were to attain national sovereignty.

The 1970's marked a turning point in this march towards liberty. It was a decade which saw the appearance on the world scene of nations which, "small" though they may be in terms of area and population, nevertheless possess the same sovereign rights as the largest nations. But how can they fully exercise such rights and, by adding their voices to the concert of nations, win a real hearing for themselves? This is not always an easy task, and Unesco, like other international organizations, has realized the need to help the small nations which constitute a growing number of its members to become more fully integrated into the international order.

This issue of the Unesco Courier is devoted to the situation of these countries, to their problems and their aspirations. Because of space limitations we have been obliged to restrict our coverage to nations which have joined Unesco since 1980, but we feel that the picture that emerges is valid for all the rest.

While most of them are islands, some are land-locked; they are thus all subjected, by definition, to a degree of isolation. Yet they have an intense cultural life which makes an invaluable contribution to the heritage of mankind. It is thus quite natural that their presence in Unesco, whose fields of activity are education, science, culture and communication, is increasingly important.

In 1986 Unesco is celebrating its first forty years of existence, and on the occasion of this anniversary, the Organization's Director-General, Mr. Amadou-Mahtar M'Bow, recalls the spirit and the ideals which prevailed when it was founded, as well as its constantly widening field of action and some of its achievements. Surely one of the most convincing signs of the continuing validity of Unesco's action can be seen precisely in the active involvement of the countries presented here in the work of international co-operation and understanding which the Organizaton is mandated to carry out. 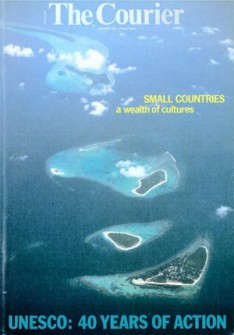