The history of man's quest for energy resources is practically that of human progress and civilization.

We are, now beginning to realize how rapidly the world assets of coal and oll are dWindling. And although the atomic age has begun we are still far from the widespread harnessing of atomic energy for industrial and other useful purposes.

Scientists have therefore turned to other more readily available sources of energy such as the greater utilization of direct solar radiation and the energy of the winds, and even the energy of sea waves for industrial, domestic and agricultura! purposes.

Unesco has given serious attention to the possibilities of using the unconventional energy sources particularly in the world's arid or seml-arid regions. As part of its regular scientific activities and particularly in its Majar Project on Scientific Research on Arid Lands, it has underta!ken a broad review of current research in different countries. In 1954, UNEsco organized an international symposium in India on Wind and solar energy at the invitation of the Indian Government (see Wind and Solar Energy, published by Unesco in 1956). In 1955, UNESco gave flnancial support to a World Symposium on Applied Solar Energy held in Arizona, U.S.A., and assisted the Department of Economic and Social Affairs of the U.N. in preparing an important study, New Sources o/ Energy and Economic Dev.elopment, published fast year.

UNESCO has only limited funds to support research projects as such. One of these has been under way ln the past year at the Beersheba Institute in Israel under the direction of Dr. H. Tabor of the National Physical Laboratory, Jerusalem. In the next two years, Unesco and the World Meteorological Organization will undertake the first world survey of solar radiation distribution, by mapping lts daily and annual variations and its dependence on altitude and other factors. The study will be carried out in co-operation with a specialized observatory and will make use of the data gathered during the International Geophysical Year. At present there is no cheap and simple instrument for measuring solar radiation and thus capable of determining the most suitable sites for solar energy development. UNESco will provide funcls to develop such an instrument as well as for testing other solar energy equipment.

In the pages that follow the Unesco Courier describes a few recent experiments in the direct utilízation of solar energy. A word of caution however is perhaps appro­priate. There is no sudden era of solar prosperity just around the corner. As the Unesco Advisory Committee on Arid Zone Research recently reported: "Utilization of solar energy holds great promise for the arid zones of the world, but an immense amount of patient and dlligent research is still needed." 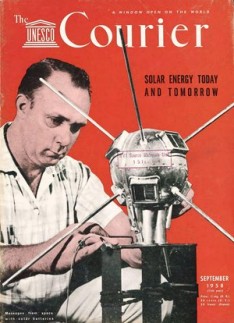