A Code for living: the ethics of human engineering

Changes are occurring so thick and fast in so many areas that the world as we knew it only ten years ago has altered beyond recognition. All the familiar landmarks that we had regarded as permanent fixtures of our lives since the end of the Second World War have been relegated to a past which is itself already growing steadily dimmer in our memories. Yet the shape of things to come is still not clear. We are in a twilight zone, shrouded in the mists of a new dawn that is slow in coming. It is a time of questioning, a time conducive to daring thoughts and new ideas but also a time fraught with all manner of dangers and violence.

Unesco is at the heart of the efforts being made to pave the way for a future in which the spirit of peace will vanquish the spirit of war, in which freedom and the rule of law, justice and solidarity will become key values for all of us.

The Couner is endeavouring to play its part in this ambitious enterprise by continuing to broaden its coverage and to eschew blinkered and dogmatic thinking.

You will probably have noticed that we have been gradually introducing a number of changes in recent issues. These stem from our concern to put readers in closer touch with the vast range of pre¬ sent-day developments and to remain fully attentive to their ideas and criticisms.

To make for easier reading and consultation changes are being made in the presentation of the monthly theme. The regular features section is being expanded. International affairs will be consistently followed up through a "global view" feature that will situate the activities of Unescoespecially as described by the Director-General in his regular "Commentary" in their world context. Reports on Biosphere Reserves, appearing between the Greenwatch section and the Heritage feature, will also add to our coverage of Unesco's main fields of activity.

As we endeavour to go on improving the Courier's editorial style and the quality of its articles and illustrations, we look forward to benefitting from your support and suggestions, and above all from your discriminating readership. 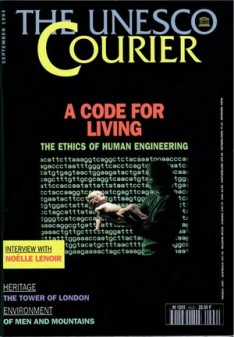