Women: one half of heaven

The women's liberation movement has a long history, but it is only in the last twenty-five years that it has become a world phenomenon. In the countries of the South the conditions in which women as a group could set forth their demands did not come about until the end of the colonial period, with the gradual opening up of societies that had hitherto been cut off from the rest of the world, the undermining of patriarchal systems, and the coming of a time when the members of the new middle classes began to express their identity as individuals.

The shock waves that had radiated from the United States and Europe in the nineteenth century and had reached upper-class Indian, Chinese and Egyptian women in the years after the First World War now began to have a worldwide impact.

As it passed beyond the pioneering stage and won an immense popular following, the women's emancipation movement gained in effectiveness what it may have lost in radical spirit. No longer to be regarded as one side in a war between the sexes, it has become part of a political, social, legal and personal struggle against power and behaviour patterns based on inequality. Women engaged in this struggle find themselves confronting men and even sometimes other women; but they also find that more and more men are joining their ranks.

The purpose of the struggle is that women should fulfil themselves in equal dignity with men; find scope for their talents in all the areas and at all the levels of responsibility that have until now been an exclusively male preserve; and have the same social rights as men and above all the same chances of success. Perhaps it is even more important that they should make their contribution to humankind's attempts to answer basic questionsabout life and death, the family and society, economic development and the future of the world.

Self-expression by women on equal terms with men in every area of life - personal, social, physical, intellectual and spiritual - is liberating tremendous creative and productive forces, encouraging new forms of participation and at the same time changing men's attitudes. The oppression of women within the family has been at the heart of all social domination systems for thousands of years. The ending of this oppression may lead eventually to the collapse of other forms of domination. In this process our common future is at stake.

See other women's issues in the UNESCO Courier. 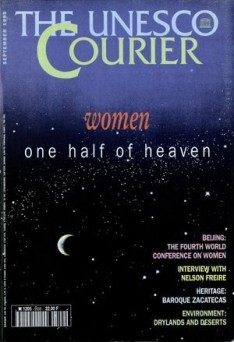