Culture and development: a life worth living

Is it a soulless process of economic growth dedicated exclusively to the creation of wealth and regarding everything, including culture, as a commodity? Or is it part of a broader endeavour to construct a society whose members are both participants and beneficiaries and whose goals are not limited to economics but shaped by the values to which these people subscribe?

These questions, which have long been asked, were recently re-examined in depth during a three-year enquiry (1993-1995) carried out by a distinguished World Commission on Culture and Development chaired by Mr. Javier Pérez de Cuéllar. The Commission's overall findings have recently been published by UNESCO in the form of an excellent report entitled Our Creative Diversity.

This issue of the UNESCO Courier is naturally more limited in scope than the Report. It is an attempt, via contributions from some of those who helped the World Commission in its deliberations, to present this complex issue to a wide public in simple terms. The conjunction of two such disparate terms as development and culture is in itself enough to give rise to misunderstandings, false problems and false solutions, and therefore invites caution.

The dominant economic system is being called to account. Its driving principle - rampant worldwide competition for profit in an open market - deploys a logic that is based on greed, inequality and pollution and in effect condemns the majority of the world's people to a grim fate. Today this system is being contested at various levels, ranging from root and branch opposition to piecemeal criticism of its specific effects. Culture often seems to be the spearhead of this challenge. But what, one might ask, is the true role and nature of culture?

Some, in the North, simply regard culture as an instrument - as one factor among others in the search for profit or as a corrective to certain excesses of the system of production. Others, in the South, use culture as an emblem of identity which can be brandished against Western ways of life. In so doing, they do not attack the dominant system's fundamental flaws, its propensity to create socio-economic inequalities and environmental damage, but the political and legal institutions that are its concomitants in democracies (individual freedoms, human rights and political pluralism). Here, support for cultural specificity masks the defence of conservative interests in patriarchal and despotic societies or the total rejection of Western society in the name of a programme which is to a greater or lesser extent fundamentalist.

Yet another way of looking at culture (in the broadest sense) is to regard it as a source of self renewal and a lever of change - as the bearer of moral, aesthetic and spiritual values that can endow economic activity with nobler purposes than the profit motive, help to liberate people from need and ignorance, stimulate their creative impulses, and establish new forms of solidarity between individuals, between peoples, and between humankind and nature.

The goal of culture regarded in this way is not to detach - and isolate - a given region or cornmunity from the rest of the world, but to enable it to play a part in the system of global exchange while enjoying full respect for its dignity, its originality and its essential interests.

Culture in this sense is not at odds with economics; it provides economics with a human face. It is the very core of a society's way of life, defining the purposes and standards which show it at its best.

But if culture is to play this role effectively, it must not be venerated as a sacrosanct immutable tradition but regarded as a malleable process capable of adapting to new situations while retaining a certain essential continuity. It must be able to sacrifice superstitions, habits and inclinations that have become oppressive, and - in the interests of self-renewal and free expression - to borrow from other societies criteria of efficiency that have proved their worth. 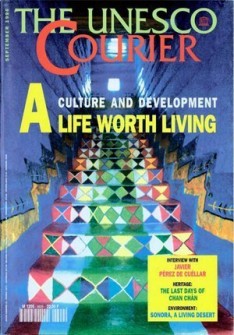