"It would abandon indeed the be vastness a mistakeof our programme; but it would have been an even greater mistake not to realize that the best programmes are those that can be carried out. The peoples expect from our Organization more than a string of promises, however fine. In deciding on the priorities... we took into account... three considerations: first, which projects are likely to be of the greatest and most far-reaching benefit to the great masses? Second, which project can best help the'leaders'in their task of serving the masses? And, finally, which projects have already reached such a stage in Unesco's work that to interrupt them would be tantamount to a costly failure and would be thought an incomprehensible lack of administrative continuity ?"

"Wherever I go", said Dr. Torres Bodet,"people ask me, why is Unesco not in touch with this or that group of intellectual leaders, thinkers, artists and poets? Does its governmental status blind it to the importance of the private associations ? You have told us yourself that the objective of Unesco is the good of man, Why, then, is there such a gulf between the average man and your Organization? "I am bound to admit that questions like that disturb me profoundly. I feel that there is still an enormous gap between the activities of Unesco and the needs, hopes and fears of that average man, that man in the street, of whose destiny we who work in Unesco must always be thinking. On the other hand, I ask in my turn: is it not for the National Commissions in each country to help us fill that immense gap?" 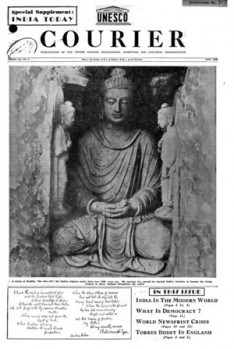